Gov. Rick Perry will officially become the former governor of Texas this Tuesday at noon when he hands over the keys to the governor’s mansion to Greg Abbott. And thus will end Rick Perry’s governorship after 14 years and change.

1. The ‘Strong’ Ad, Gay Veterans Can Get Out of Texas and Equating Gay People with Alcoholics

OK, so this one is technically three moments. But, hey, with the outrage level so high in these instances of Gov. Perry attacking gay people, we decided to just call it a tie.

So moment 1a. is Gov. Perry’s infamous “Strong” commercial that ran during his failed bid for the White House, an ad that many saw as a sign of desperation from a campaign that was at that point pretty much doomed. In the ad, Perry says:

“I’m not ashamed to admit that I’m a Christian. But you don’t need to be in the pew every Sunday to know that there’s something wrong in this country when gays can serve openly in the military, but our kids can’t openly celebrate Christmas or pray in school.”

1b. Speaking of gays in the military, Gov. Perry told gay Texas veterans to go find a “better place for them to live.” Yep, Gov. Perry said it. During the 2005 campaign to pass a state constitutional amendment banning same-sex marriage, a reporter asked Gov. Perry what he had to say “to gays and lesbians who are serving in the military right now in Iraq who are going to come back to Texas and may not be entitled to the same rights as the rest of us?” His response:

“Texans have made a decision about marriage and if there is some other state that has a more lenient view than Texas, then maybe that’s a better place for them to live.”

1c. During an event in San Francisco in June 2014, Gov. Perry was asked if he believed “homosexuals can be cured by prayer or counseling?” Here’s his response:

To his credit, and perhaps learning a lesson from his first presidential campaign as he prepares for a second run in 2016, Gov. Perry did later express contrition about the alcoholism comment. Well, sort of.

In August 2011, Gov. Perry headlined a prayer rally in Houston titled, ” “The Response: A Call to Prayer for a Nation in Crisis.” The massive rally at Reliant Stadium took place just a few days before Gov. Perry announced he would run for president in 2012. What a coincidence, right? But what was really remarkable was the sponsor of the whole thing: The American Family Association, a Mississippi-based organization labeled a hate group by the Southern Poverty Law Center and whose stances include an insistence that the First Amendment applies only to Christians.

Remember all those moments when Gov. Perry expressed his love for science? Neither do we. Gov. Perry has on multiple occasions embraced creationism. If that’s what Gov. Perry believes, that’s fine. But creationism is a religious belief, and it’s a whole different ballgame when you try to impose that belief on children by teaching as if it were science in our public schools.

How old is the Earth? All Gov. Perry knows is that “it’s pretty old.”

Then there was Gov. Perry’s science denialism on climate change, telling a reporter that he’s “not afraid” to call himself a climate skeptic. This seems like the appropriate point in this post to note that Texas experienced a crippling drought during Gov. Perry’s tenure.

“Why not? They took it out. They can sure put it back in.” 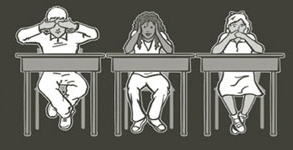 In the most TMI moment of his governorship, Gov. Perry volunteered this tidbit of information during a Texas Tribune event:

Interviewer: “But we have the third highest teen pregnancy rate among all states in the country. . . . It doesn’t seem to be working.”

Gov. Perry: “It works. Maybe it’s the way it’s being taught or the way that it’s being applied out there. But the fact of the matter is, it is the best form to teach our children.”

Interviewer: “Can you give me a statistic suggesting it works?”

Gov. Perry: “I’m just going to tell you from my own personal life, abstinence works. And the point is, if we’re not teaching it, and if we’re not impressing it upon them, then no.

The fact is that Texas has historically ranked among the worst states when it comes to teen pregnancy. All the while, politicians like Gov. Perry have insisted on abstinence-only sex-ed policies that the research says simply don’t work.

Bonus: Bringing the Culture Wars to the State Board of Education