Promoting Equality & Social Justice for All

In the face of a challenging 2021, your support today will enable TFN to respond quickly to urgent threats and fight back at a moment’s notice with everything we have.

TFN is a grassroots network of more than 150,000 individuals throughout Texas. Help make Texas a better place and join our efforts today! 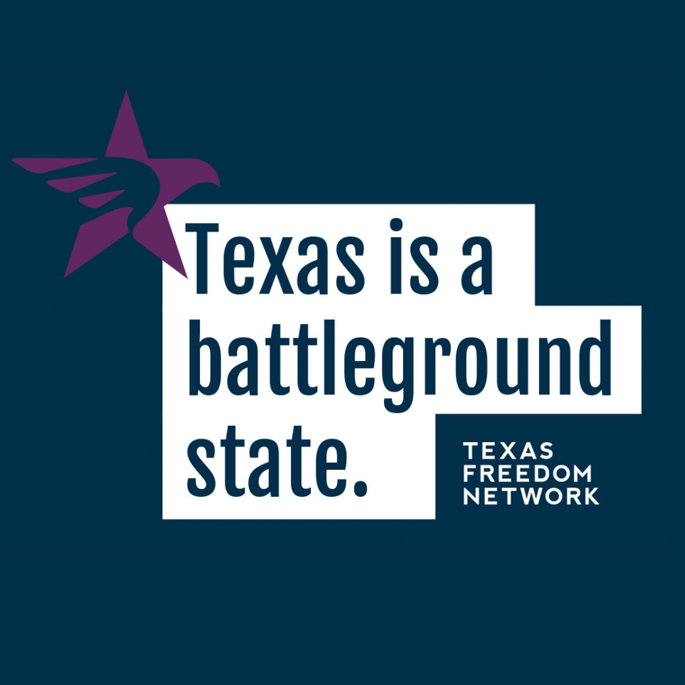 Monthly giving is the easiest way to make an impact

Your donation to the Texas Freedom Network provides critical resources to champion progressive values at the Texas Legislature, State Board of Education and in communities across the state.

AUSTIN, Texas – As Saturday nears marking the 49th anniversary of the landmark Roe v. Wade U.S. Supreme Court ruling which correctly found that access to abortion is a constitutional right, the future of abortion care is uncertain.

“This year’s anniversary of Roe v. Wade comes at a time when the future of abortion access is at its bleakest. Most abortions in Texas stopped when the draconian SB 8 went into effect last September. At the U.S. Supreme Court, comments by the justices during arguments on a Mississippi anti-abortion law appear to indicate the conservative-leaning court may shamelessly ignore its own precedent by gutting or outright overturning Roe later this year. Sadly, we even lost true Texas champion Sarah Weddington – who as a young attorney successfully argued the Roe case – when she passed away in December.

“We can’t sugarcoat it: Abortion rights supporters have lost a lot and may soon lose even more. But I can promise you that what this movement has not and will never lose… Read More

As we honor Dr. Martin Luther King Jr. today, the words “I have a Dream” come to mind. But in 2022, with the current Texas political climate, it’s critical that we remember all of Dr. King’s teachings and that his “dream” included ending white supremacy by seeking systemic change.

A fact, many are quick to forget.

In the 87th Texas legislative session, Republican State Rep. Steve Toth authored a bill that would censor what teachers taught in their classrooms and order them to exclude material politicians believed “too controversial.” This includes highly subjective restrictions on discussions about the legacy of racism and discrimination in American history. Toth made an additional attack on our history by saying that the bill “echoes Dr. King’s wish that we should judge people on the content of their character, not [the color of] their skin.” Now, I never knew him, but I’m sure that Dr. King’s dream didn’t include banning the history of racism from our classrooms.

Let’s take a minute here to think about what’s happening. While we still mark a day on our calendar to celebrate the teachings of Dr. King, Republican-led legislatures are quickly taking the steps to erase what he stood… Read More

Best and Worst of the 2021 Legislature

As 2021 comes to a close, TFN is looking back at some of the best and worst moments in and around the Capitol. But let’s be real, most of the moments are in the “worst” category as the regular legislative session was followed by three additional 30-day special sessions.

The result: Texans spent most of the calendar year fighting the far-right’s assault on their rights inside the Capitol.

Don’t miss your chance to make twice the impact on social justice. Donate to TFN by midnight on December 31 and your gift will automatically be doubled.

Two-Year Overhaul of Science Standards Saw Progress, but Pressure from Oil and Gas Interests Still Leaves Texas Far Behind Other States on Teaching about Climate Change

“The progress we made on getting the state board to ensure that Texas schools teach students the full truth about climate change has been important, but that progress is uneven, not nearly enough and largely ignores the urgency of the matter,” Benavidez said. “Texas will still lag far behind most states in teaching students about what scientists warn is a serious and growing crisis. Tragically, this is yet another example of the ways in which political agendas and corporate interests in Texas continue to undermine the importance of educating our kids about the challenges they will inherit.”

AUSTIN, Texas – The Texas State Board of Education voted today to adopt new health textbooks from just one publisher after critics attacked all of the textbooks for content — even in optional units — that addressed topics related to sex education. Digital textbooks for elementary and middle school offered by three other publishers failed to win approval.

“This week offered yet more evidence that politics continues to trump education and teaching the truth in Texas schools, even when it comes to the health and lives of our kids. The votes this week make clear that the Texas State Board of Education remains very much in the textbook censorship business. It’s frustrating to see the health and education of millions of Texas students continue to be held hostage to the politics of ignorance and exclusion.”

Background Following the board’s preliminary rejection Tuesday of all middle school and high school textbooks submitted for health classes in Texas, publishers on Wednesday offered a variety of changes in an effort… Read More