Today Texas Gov. Rick Perry signed sweeping anti-abortion legislation that severely restricts women’s ability to make their own medical decisions and decide whether and when to have children. Thousands of women and men from across the state have come to the Texas Capitol in recent weeks to protest the legislation’s passage. Many others took action in their local communities to organize opposition to this newest assault in the right’s war on women and women’s health care.

We’ve already reported about some of the outrageously offensive rhetoric from the right. State Rep. Bill Zedler, R-Arlington, for example, called opponents of the bill “terrorists.” Cathie Adams, head of the far-right group Texas Eagle Forum, sneeringly called them “stinky stalking feminists” and “feminazis.” Another right-wing activist, Peggy Venable of Americans for Prosperity-Texas, called opponents “nasty” and declared that they “should not procreate” and should be sterilized. Others even called state Sen. Wendy Davis, D-Fort Worth, “murderer in chief.” and a “Human Barbie Doll.”

In fact, while Sen. Davis courageously filibustered in June — for more than 11 hours — in an attempt to stop the assault on women’s access to reproductive health care, state Rep. Dan Flynn, R-Van, couldn’t hide his contempt: 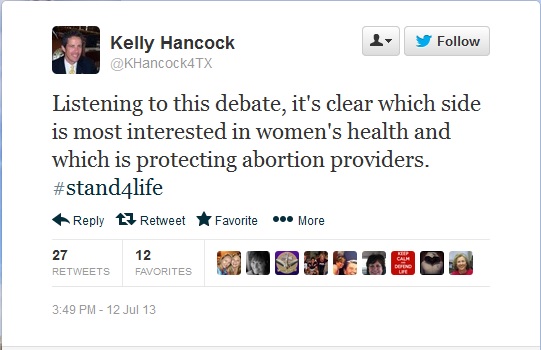 State Rep. Jeff Leach, R-Plano, claimed to know four Democrats in the state House who supported the anti-abortion bill but voted against it because of “threats from party leadership.” He didn’t name them, of course. Nor did he acknowledge the pressure put on House Republicans by religious-right groups supporting the bill. So this absurd tweet from Leach wasn’t surprising:

As we have already shown, many insulting comments were directed toward citizens who came to the Capitol to express their opposition to legislation they see as a danger to women and women’s health care. Lt. Gov. David Dewhurst pounded his chest: 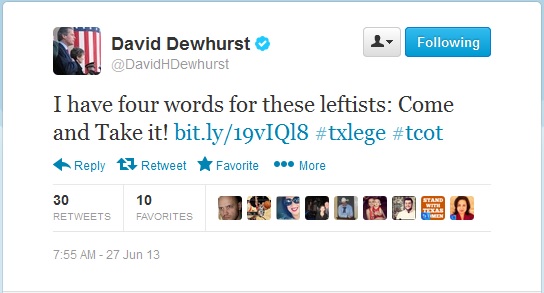 The lieutenant governor also couldn’t resist trying to tie the debate in Texas to national politics, ridiculously denouncing what he called the “Obama-style, mob-rule politics” of opponents:

“The message sent by the angry throng gathered from across the country was clear: they will stop at nothing to undermine conservative Texas values. When abortion activists attack the sanctity of life, when the Supreme Court erodes the nuclear family and the Obama administration imposes radical environmentalism on our economy, I have four words for them: COME AND TAKE IT!”

Plenty of other politicians, like state Rep. John Stickland, R-Bedford, also insultingly referred to citizens who opposed the bill as a “mob”:

State Rep. Steve Toth, R-The Woodlands, who accused opponents of bringing “feces, urine, used tampons and bricks to throw at DPS” troopers at the Capitol, also repeated the absurd exaggeration about opponents chanting “Hail Satan.” His Twitter post linked to a video that actually showed a single protester mockingly use those words:

Post your own comments about other outrageous and offensive rhetoric you heard from the right during the debate over the past two months. But more important, don’t forget. Don’t forget what they said about you and other citizens who proudly stood against their war on women and women’s health care.

23 thoughts on “Will You Remember?”