The Lies Behind the Hate 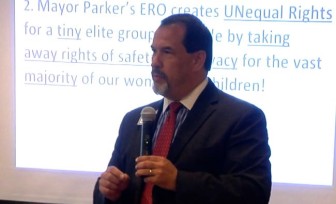 Dave Welch, the Houston-based religious-right leader who helped lead the smear campaign to repeal the Houston Equal Rights Ordinance last year, wants folks to think he really supports equality for all. But his own rancid rhetoric betrays him.

Here’s an excerpt from a letter he sent last week to the Mesquite City Council after that body amended its equal employment opportunity policy to bar discrimination against city employees and applicants who are LGBT:

“We, like each of you, are for equal rights for all people.  When we defeated Houston’s ‘HERO’ ordinance it was because it created special classes that were undefinable and did not exist in state or federal law, jeopardizing the rights of all to patronize a noisy special interest group.”

Welch isn’t telling the truth here, of course. He isn’t really concerned about “equal rights” for all people. He also misleads on why he helped lead opposition to HERO. The reason wasn’t about any alleged “confusion” about sexual orientation and sexual identity. He simply wants the right to fire and deny housing and public services to people because of who they are or whom they love. That’s why he insisted that Houston was in “the presence of evil” during the anti-HERO campaign. That’s why he sneeringly refers to LGBT people as a “noisy special interest group.”

The sneering continues as he wonders why Mesquite or any other city would want to protect LGBT people from discrimination:

“In addition, according to U.S. Census data, self identified ‘same sex’ households are on the top tiers of income, education, housing and, of course, are anything but politically disenfranchised. By adding these categories to your EEO Policy Statement you are letting the camel’s nose and torso into the tent for the same threats against freedom and safety citizens are fighting in increasing number of cities. Please don’t let Mesquite, Texas be one of those who fall prey to this red herring.”

Ah, the illogic of bigotry. LGBT people, he argues, can’t suffer from discrimination because they (supposedly) make too much money, their homes are too nice or they have too much education. So, he insists, we must protect “freedom” and “security” by making it easy to threaten their income, their housing and their access to public services everyone else takes for granted. (And never mind, of course, that many LGBT people don’t have high-paying jobs, good housing and a good education — as if that really matters when you’re talking about treating someone as unequal under the law.)

Welch claims there is “no crisis” and “no discrimination” that justifies the City of Mesquite’s employment nondiscrimination policy. Yet he argues in the same piece for the right to discriminate. Mesquite’s City Council simply said “no,” at least when it comes to discriminating against city employees and job applicants.

Frankly, it’s worse than a joke for someone like Welch to claim he supports “equal rights” for everyone. It’s simply a lie. And we know that because of the vile things he says about LGBT people, such as:

And more than 36 hours after the massacre at an LGBT nightclub in Orlando, still not a peep out of Welch. But maybe it’s a cheap shot to call him out for that. Maybe he just needs more time. Maybe he’s just been too busy trying to persuade folks how much he loves and supports equality for everyone. Yeah, maybe that’s it.