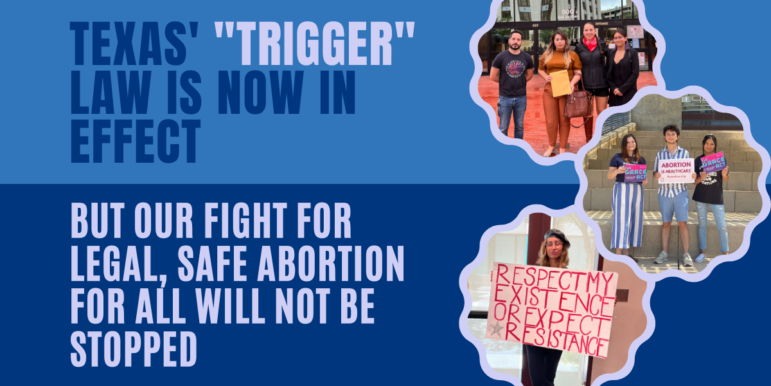 Roe fell on June 24, 2022. The Supreme Court devastated thousands of Texans on that Friday in June as we saw our last nationwide legal line of defense for abortion access crumble. In many ways, Texans have watched Roe v. Wade’s overturn in slow motion–and now, another dreaded moment has arrived. Our “trigger law” officially goes into effect, and while abortion providers had already stopped abortion services in Texas, the penalty for performing the procedure will increase significantly.

As difficult as the months since June 24 have been and these new challenges will be–advocates, activists, and residents have remained committed to building a future where our bodies are our own. We will certainly need the continued strength of our community for all that may come next.

While we want to take time to explain what the trigger law means for Texans, we cannot let this diminish our hope for the continued fight ahead.

There’s been incredible work and advocacy happening in Texas and beyond to fight for reproductive justice since Roe’s fall that deserves to be uplifted, along with the most current resources available as we build our path forward together.

What exactly does the trigger law mean for abortion in Texas?

The “trigger” law, House Bill 1280, bans abortion from fertilization and criminalizes any attempt by a medical professional to perform, induce, or attempt an abortion. The law increases the penalties for performing an abortion up to life in prison. The trigger law also says that the attorney general “shall” bring a lawsuit to seek a civil penalty of no less than $100,000 per abortion performed.

The only exception to the law is cases where the person carrying the pregnancy could be severely injured or lose their life–but as we’ve already seen in Texas since the passage of SB8, our six-week abortion ban–medical professionals have no clear guidance on what cases meet these exceptions and many pregnant Texans have already been denied or forced to wait unsafe amounts of time for the care they need.

How activists, advocates, and communities have shown up for abortion access since the fall of Roe

People are talking about abortion more than ever. People are sharing their personal abortion stories, gathering in solidarity at rallies and protests, proclaiming their support for the full spectrum of reproductive healthcare, and meeting each other where they are to educate themselves and their communities on why abortion is a moral and social good.

We’re seeing that most Texans and most people in the United States support access to lifesaving healthcare. People are ready for real change–and they’re voting for it–with Kansans most recently winning the fight to keep abortion legal in their state.

Several Texas cities have held city council meetings to hear from the public and vote on a slate of policies geared towards decriminalizing abortion. Dubbed “the GRACE Act” by some cities, these resolutions are designed to prevent the use of city funds to investigate and enforce criminal laws concerning abortions and other reproductive healthcare, like medical care following a miscarriage.

Texas Freedom Network and Texas Rising are on the ground speaking, mobilizing communities, and advocating for the passage of these pro-choice city resolutions in Austin and El Paso while supporting fellow advocates in Dallas and San Antonio.

Each one of these cities ultimately passed resolutions supporting abortion access except in El Paso–where the vote was narrowly decided by a tie break from Mayor Oscar Leeser.

Still, we’re proud of Texas activists, like Texas Rising and Texas Freedom Network’s own Ivonne Diaz and Sabrina Bustillos who testified during the meeting in support of the resolution.

And while the resolution in El Paso did not pass at the city council level–we are not backing down.

Just last week, El Paso Regional Field Coordinator Ivonne Diaz hand-delivered a letter to El Paso District Attorney Yvonne Rosales demanding she makes abortion cases the lowest priority in her jurisdiction and joins Fair and Just Prosecution’s joint statement in which nearly 90 elected prosecutors from around the nation pledged not to prosecute or file charges against people who access abortion services or those who help them access abortion resources.

On the faith side, our project mobilizing progressive voices of faith, Just Texas, is committed to changing the narrative surrounding abortion for both people of faith and those of non-faith through our work in partnership with clergy members, their congregants, and Reproductive Freedom Congregations.

What resources exist for Texans in need of abortion now?

While abortion care remains inaccessible in Texas, abortion funds like the Lilith Fund are once again able to offer emotional support and resources via their hotline, although they are still unable to provide financial support for people seeking abortions. We have hopes that more funds will have similar options open soon.

As an additional resource, we’ve created a Post-Roe Info + Action Center where you can find info on the evolving state of abortion access in post-Roe Texas, answers to some commonly asked questions, tips for talking about abortion, details about state-based events and rallies, and more. The following sites are helpful resources as well:

Our fight for freedom over our own bodies will never stop.

Today may feel bleak for many of us as we seemingly take yet another step backward in our fight for true equality and access to abortion.

It is okay to give ourselves space to feel that grief–but know that if we were not powerful, there would be no reason for anti-choice lawmakers’ continued attempts to control our bodies and our lives.

We have the strength to navigate this new world and forge our future path together. Our fight to make abortion permanently legal, safe, and accessible for everyone cannot and will not stop. We will never stop caring for our communities.