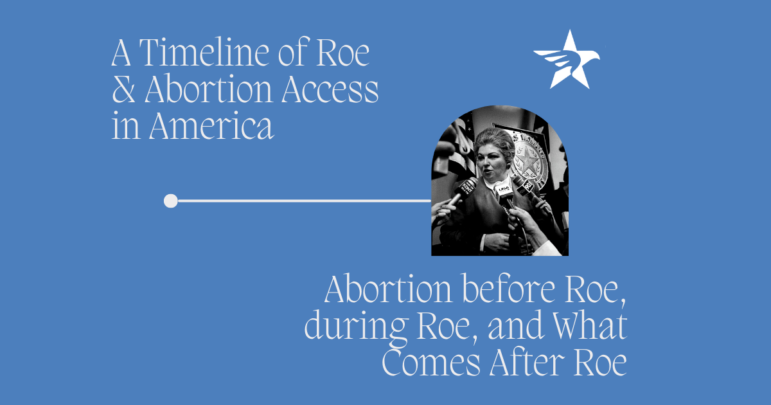 By the end of this month, June 2022, the U.S. Supreme Court will most likely release a decision in Dobbs v. Jackson Women’s Health Organization–and the Court’s ruling will directly decide the future of the landmark 1973 ruling on Roe v. Wade, which made abortion legal in the United States–although not without significant barriers to access.

If Roe is overturned, or even weakened by the Court’s ruling, the power to determine the right to reproductive healthcare services will be given to the states–putting access to abortion in an even more vulnerable position, particularly in states like Texas, where we have laws that will ban this care within 30 days of the ruling. Still, there is much uncertainty around what the fall of Roe could fully mean.

Roe v. Wade has been the law of the land for almost 50 years–and if the Court were to overturn it, this would be the first time that the U.S. Supreme Court issues a ruling that reverses our rights instead of strengthens them. Many of us do not know a time without Roe v. Wade, and we’re left wondering: What was abortion access like before Roe, during Roe, and what could it be like after Roe?

Let’s jump way back for some context–all the way to 1847!

Doctors around the country form the American Medical Association, and the male-dominated body notably takes aim at reproductive healthcare and workers in the field. By attacking abortion practices and claiming that the medical procedure was “unsafe,” doctors, who were not historically held in high esteem, could “denounce amateurs” and begin cementing themselves as the true American medical authority.

It should be noted that until the professionalization of medicine in the mid-1800s, abortion was a common and accepted practice in the United States–there were even advertisements for abortion services in newspapers.

Unsurprisingly, the crusade to criminalize abortion and standardize medical practices coincided with conservative society’s growing concern that white, affluent families were becoming smaller in size compared to recent immigrant families due to the wealthy’s access and ability to have a hand in family planning.

1880 – 1930: The “century of criminalization” begins, abortion is banned nationwide, and death rates from unsafe abortions rise

By 1880, every state had laws that restricted abortion care at varying levels–with some states allowing the medical procedure to save a patient’s life, at the discretion of their (likely male) doctor. With the criminalization, the stigma surrounding the procedure began to grow.

Fast forward to 1910, and these restrictions had become outright bans on abortion in every state, at every stage of pregnancy. Again, the cultural driving force was the worry that “upper-class” white women were not having enough children. By 1930, 18% of maternal deaths in the country were the result of unsafe, illegal abortions.

In response to the rising number of deaths caused by illegal abortions and the growing media coverage, Planned Parenthood organized a conference in 1955 called “Abortion in the United States.” During testimony, doctors attending publicly called for abortion law reform.

The conference launched a national discussion on reformed abortion laws, and in 1962, a pregnant TV host’s public journey to obtain an abortion gave the issue more national spotlight. She’d ingested a drug called thalidomide, which causes severe birth defects, and had to travel to Sweden for the procedure. 52% of Americans supported her as the story drew more support for abortion law reform, and by 1964, abortion law reform activists registered their first national group: the Association for the Study of Abortion.

The Supreme Court recognizes for the first time that the constitutional right to privacy “is broad enough to encompass a woman’s decision whether or not to terminate her pregnancy.”

Roe v. Wade protected the right to make your own reproductive healthcare decisions in all 50 states, making access to abortion safer than it had ever been–although its protections have never been enough to make care easily accessible to everyone in the United States.

The reality remained that people of color, young people, and people of low income still saw obstacles to receiving access to abortion care.  An onslaught of restrictions would follow the landmark decision.

For a comprehensive timeline of everything that happened in between visit this source.

State lawmakers pass the “Women’s Right to Know Act,” which mandates that doctors give medically inaccurate info to patients about abortion procedures and counsel them to explore alternative options–all laid out in state-provided pamphlets. Then, patients are forced to wait 24 hours after their first appointment to have the actual medical procedure, and all abortions at 16 weeks or more have to be performed in an ambulatory surgical center, which is basically a mini-hospital. None of Texas’ 54 non-hospital providers met the standard of an ambulatory surgical center when the law took effect in 2004.

In 2005, Texas enacted a law requiring minors to get parental consent before they could obtain abortions. Then, in 2011, the state began forcing patients to undergo a sonogram, listen to the fetal “heartbeat,” and receive a verbal explanation of the sonogram results 24 hours before they could have an abortion.

Texas passed House Bill 2, or “HB2” as it is commonly known, a robust abortion bill that imposed several additional restrictions on abortion, inspiring former Senator Wendy Davis’ famous 13-hour filibuster. One restriction banned the procedure after 20 weeks post-fertilization unless a patient is at risk of death or the fetus has a severe medical problem.

2016: Texas’ attempt to force burial or cremation of any tissue resulting from an abortion

In an act of cruelty that could be in no way linked to health or safety, Texas began requiring clinics to pay extra money to bury or cremate any tissue resulting from an abortion. Reproductive rights advocates challenged this law, and it was stopped from going into effect.

2017 – 2019: Minimizing access by targeting insurers & other financial avenues for abortion

In 2019, the strategy to make abortion financially inaccessible continued with Senate Bill 22–which was created to essentially defund Planned Parenthood. The bill “prohibits certain transactions between a governmental entity and a provider or affiliate of the provider.” Basically, cutting off any abortion care for communities that rely on low-cost clinics like Planned Parenthood–and this law doesn’t just harm abortion access. Many clinics that lost funding were the only ones in their area that provided basic necessities like birth control, annual preventative exams, cancer screenings, and diabetes testing at an affordable cost. Some didn’t even provide abortions, but they lost funding all the same.

Senate Bill 8 became law in September 2021. It allows private citizens to sue providers–or anyone allegedly involved in “aiding and abetting” the medical procedure–over abortions performed after six weeks. This is before most people know they’re pregnant.

The result: We’re effectively living in a post-Roe Texas.

This cruel law has taken government overreach to a new level by expanding what the government can do to our bodies and controlling abortion providers’ ability to perform safe medical procedures. In addition, not allowing Texans to make their own healthcare decisions has overwhelmed clinics and providers in neighboring states, causing people across the region to struggle with finding abortion care–particularly after Oklahoma lawmakers callously chose to ban abortion almost completely in May 2022.

While this timeline is not at all comprehensive (see below for more sources to fill in the gaps), it illustrates the decades-long, coordinated attack on our right to abortion healthcare. For many advocates, it’s been clear that Roe would be overturned someday for a very long time–yet, there are still so many questions about what the ruling’s impact might truly be, and the expectation does not lessen the collective anxiety that providers, patients, activists, and community members are feeling.

One thing we do know: Our fight to make abortion permanently legal, safe, and accessible for everyone cannot and will not stop. Our care for our communities cannot stop.

Roe was never enough to provide access for all–the time is now to reimagine a new timeline, together.

Key sources for our timeline:

ACLU of Texas: A Recent History of Restrictive Abortion Laws in Texas

The New York Times: Who Gets Abortions in America?