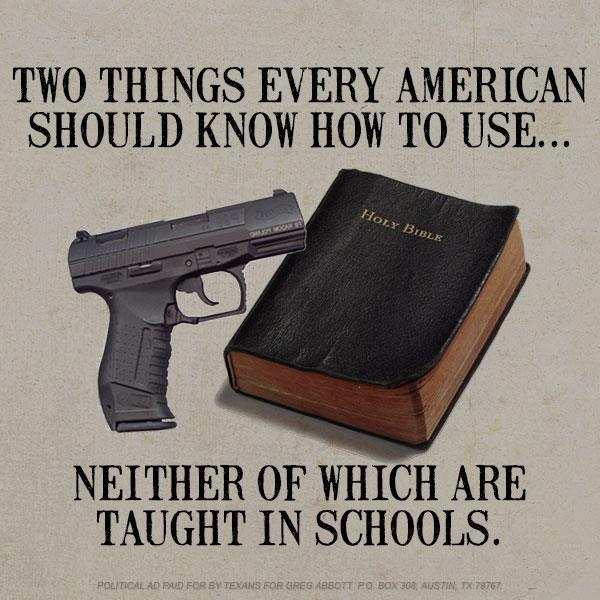 — An online ad from Texas Attorney General Greg Abbott, which includes pictures of a semi-automatic pistol and a well-thumbed Bible.

We win. You know why we win? Because we’re on God’s side and we’re the only side having babies.

— Carol Everett, at a rally sponsored by anti-abortion groups at the Texas Capitol.

One thing that requires ongoing vigilance is the reality that the state of Texas is coming under a new assault, an assault far more dangerous than what the leader of North Korea threatened when he said he was going to add Austin, Texas, as one of the recipients of his nuclear weapons. The threat that we’re getting is the threat from the Obama administration and his political machine.

Jeff, thanks for your support.

I’m going to be real honest with you. The Republican Party doesn’t want black people to vote if they are going to vote 9-to-1 for Democrats.

— Tea Party leader Ken Emanuelson at a gathering in Dallas.

The attorney general will not cast aspersions on my asparagus.

— U.S. Supreme Court Justice Antonin Scalia, complaining about schoolchildren who visit his office and say the U.S. Constitution is a living document.

Beware of these scamsters, especially scamsters in religious garb quoting the Bible. I mean, run from them. They’re all over the place.

I don’t know what game you’re talking about. I know there’s one called Dungeons & Dragons that literally destroyed people’s lives.

— Televangelist Pat Robertson, advising a viewer on which video games to play (or avoid).

Gary Brown, head of the Idaho-based group Reach America, which features teens saying they will build “an army” commanded by Christ.

I think both parents started working. And the mom is in the work place.

— Republican Mississippi Gov. Phil Bryant, responding to a question about how America became “so mediocre” in regard to educational outcomes.

(T)here’s no way a Christian can help support what is attacking God. I’m sorry, you’ve got to find some other coffee to drink. You can’t drink Starbucks and be Biblically correct on this thing. It’s just a real simple principle.

It’d be like an act of treason if this were a military term, but to do that spiritually, you can’t go join the enemies of God and expect God to bless you on all the values and all the things he said was right and wrong.

You get all kinds of problems where you ache like crazy. That’s the truth of it, if you don’t have some carbs in there. The carbs are the fire that burns everything.

— Pat Robertson, telling a viewer that a low-carb diet “violates the principles that God set down.”

[We will be burning] books by a lot of different authors who we consider heretics, such as Billy Graham, Rick Warren… the list goes on and on.

— Marc Grizzard, of Amazing Grace Baptist Church in Canton, North Carolina, who says that the first King James translation of the Bible is the only true declaration of God’s word, and that all others are “satanic.”