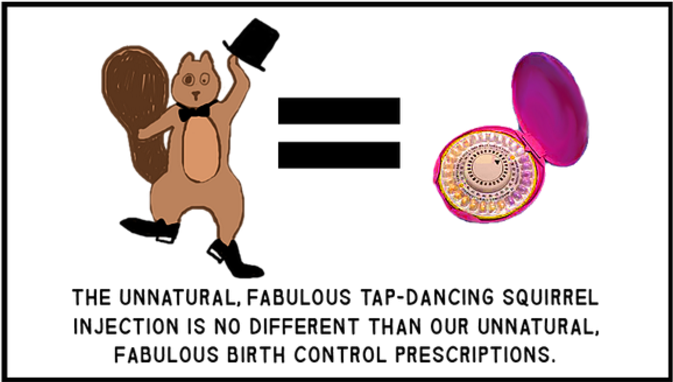 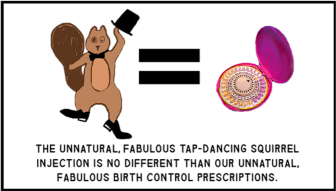 Are Texas public school students going to learn that using contraception is as “unnatural” as underwater, tap-dancing squirrels? The state sure seems to be inviting that kind of nonsense into its Abstinence Education Program.

The Texas Department of Health and Human Services program is inviting schools to apply for grant funding to use outside curricula for sex education. The state has approved eight abstinence curriculums from which schools can choose. As we began to look at the organizations that created those curriculums, we thought to check out the Facebook page of one of them: Pure and Simple.

Check out this Facebook post from August 7, which sends folks to a webpage lesson produced by a program called ChurchPOP. The lesson features a series of cartoon slides under the title “The Abortion-Contraception Connection — Explained with Tap Dancing Squirrels!” Seriously. You really have to see it.

The lesson essentially teaches that using contraception is as “unnatural” as injections that would allow squirrels to tap dance under water. The “analogy should be self-evident,” the lesson claims:

“Birth control is part of the problem. It sets us up for unrealistic expectations. It makes us think something’s gone wrong if pregnancy occurs… when that’s really the purpose of sex all along.”

We don’t know whether Pure and Simple uses that cartoon lesson in its own curriculum, but the folks over there seem to think it’s a good one. And now the Texas Department of Health and Human Services seems to think that using public dollars to bring Pure and Simple into schools across the state is a swell idea.

Of course, our comprehensive report on sex education in Texas public schools in 2009 demonstrated that discouraging the use of birth control is common in abstinence-only programs. We also found that such programs are riddled with myths and factual inaccuracies, promote ridiculous and offensive gender stereotypes, and often rely on fear and shaming as instructional strategies. And the vast majority of Texas public schools use abstinence-only programs for sex education — this in a state with one of the highest teen birth rates in the nation.