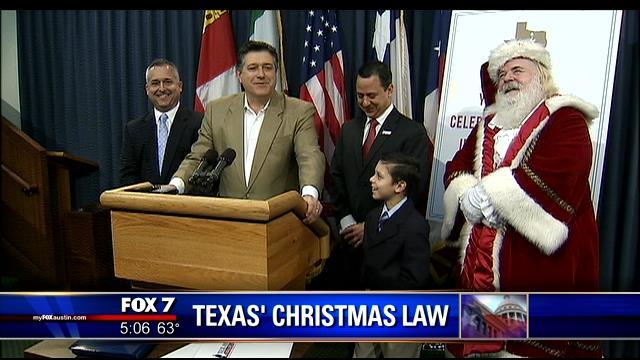 We suppose nothing says “Jesus is the reason for the season” better than a photo of … uh … Santa Claus.

It’s amusing how the Austin-based, religious-right group Texas Values is promoting the so-called “Merry Christmas Law” it helped pass last year. The group says the law protects religious freedom. And this month it held a press conference to highlight the law with a couple of legislators and Santa Claus. Yeah, nothing says “putting the Christ in Christmas” more than a fat man in a red suit standing next to politicians. Ho ho ho.

The law says school district employees and students can wish each other Merry Christmas (or any other holiday greeting they like) at school. Of course, the First Amendment has protected that right for well over 200 years, and the rare and misguided attempts to prevent such greetings get swatted down pretty quickly by the courts. But cynical groups like Texas Values know one good way to raise money is to persuade Christians — who make up the vast majority of the population in this country and celebrate Christmas openly and publicly, along with countless businesses and public entities — that the mythical “war on Christmas” is real and that they are being persecuted.

Well, we wish the folks at Texas Values a warm Merry Christmas. Or if any of them are Jewish, Hanukkah Sameach. And to everyone, whatever your faith or tradition, whether you celebrate any religious or cultural holidays or just the New Year, Happy Holidays!

5 thoughts on “The Reason for the Season?”