Texas state Rep. Molly White, R-Belton, lost her re-election bid in the Republican primary on March 2, but she’s still reinforcing her reputation as one of the Legislature’s biggest Islamophobes. Wednesday night she posted on her official Facebook page a link to a video featuring Brigitte Gabriel, one of the most vicious anti-Muslim extremists in America today. In the video Gabriel supposedly “reveals how the Muslim Brotherhood plan for America.”

When a commenter points out that the video is hateful nonsense, White replies:

“Yes, I hate Islam, the Muslim Brotherhood and all terrorist organizations. I will fight for your freedom to be ignorant and hateful to your fellow Americans because I love America and everything she stands for even when her own turn against her.” 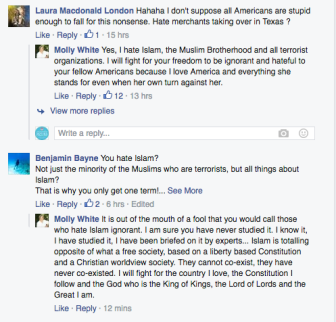 In further comments she defends her hatred of Islam and claims: “I know it, I have studied it, I have been briefed on it by experts.”

In Molly White’s twisted world, apparently, all of the world’s more than 1.6 billion Muslims are terrorists. And hating Muslims somehow demonstrates her “love” for America. Her love for America doesn’t seem to extend to America’s guarantee of religious freedom for all. Nor does it extend to Americans who believe differently than she does.

You’ll recall that White infamously insisted that Muslim Texans visiting her office “renounce Islamic terrorist groups and publicly announce allegiance to America and our laws.” “We will see how long they stay in my office,” she sneered on her Facebook page.

Even Republican legislative leaders have rebuked White for that kind of incivility and disrespect.

But that hasn’t stopped her. This past December she suggested that President Obama be arrested for treason because, she claimed, “he entertains the MB [Muslim Brotherhood, presumably], arms terrorist, ignores terroristic attacks on American soil, appoints Muslims to serve on Homeland security positions, releases terrorists from Gitmo.”