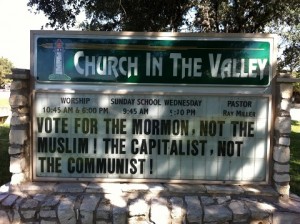 Americans United for Separation of Church and State has asked the Internal Revenue Service to determine whether a Texas church has violated federal tax law by posting a public sign urging people to “vote for the Mormon, not the Muslim.”

According to AU, the pastor of the Church in the Valley in Leakey, Texas, posted the message on the church’s marquee outside. Leakey is west of San Antonio. The full message read, “VOTE FOR THE MORMON, NOT THE MUSLIM! THE CAPITALIST, NOT THE COMMUNIST!”

“This sign is a blatant attempt to intervene in a political campaign,” said the Rev. Barry W. Lynn, executive director of Americans United. “I urge the IRS to crack down on this over-the-top law-breaking.”

ABC News reported that the sign “was an obvious reference to President Barack Obama, who conservatives say is a secret Muslim even though he says he is a Christian and attends church with his family.” The “Mormon” reference is to Gov. Mitt Romney, a member of the Church of Jesus Christ of Latter-day Saints.

In a letter delivered to the IRS today, Lynn requested an investigation of the matter.

“Miller [the pastor] may indeed have strong feelings about the election, but that does not give him the right to use his tax-exempt church to endorse a candidate,” Lynn wrote to IRS officials. “In fact, Miller’s actions are a clear and flagrant violation of the law.”

Religious-right groups have been urging conservative Christian churches to flout federal tax law, which bars houses of worship and other tax-exempt nonprofits from supporting or opposing candidates in political elections. Organizations found in violation of that law can lose their federal tax exemption.

Beyond the question of law, however, is the pastor’s outrageous attack on President Obama’s religious faith. The president has affirmed — repeatedly — his Christian faith and was a longtime member of a Chicago Christian church.

So once again we see an example of efforts to drag churches into partisan politics and to use faith as a political weapon to divide Americans.

17 thoughts on “Texas Church Posts Sign: ‘Vote for the Mormon, not the Muslim’”