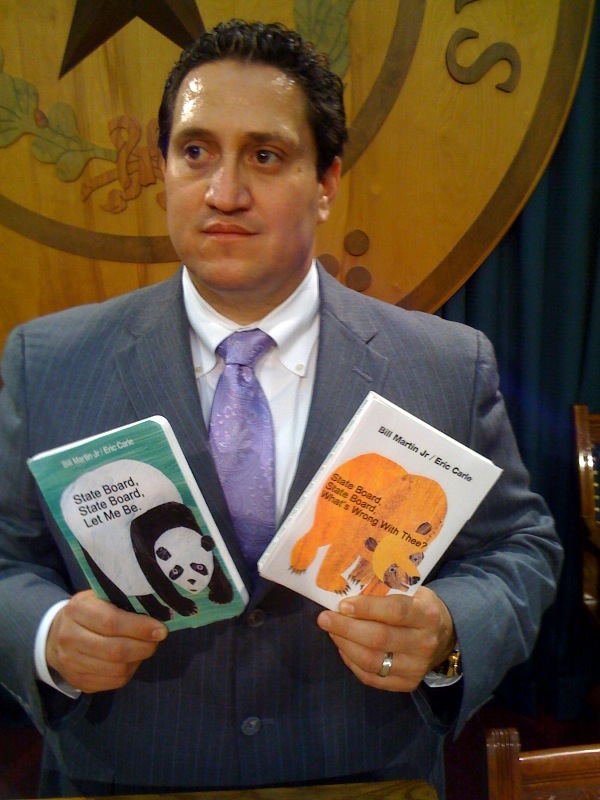 Today Texas lawmakers picked up a bigger megaphone to get the attention of a bitterly divided, out-of-control State Board of Education. At a Capitol press conference, members of the Mexican American Legislative Caucus (MALC) announced that they are scheduling a public hearing for April 28 to examine how and why the state board has run off the tracks and what the Texas Legislature should do about it.

Calling the board a “national circus,” MALC Chairman Trey Martinez Fischer (photo), a Democratic state representative from San Antonio, said the hearing will focus on the board’s badly broken process for developing curriculum standards and adopting textbooks. The hearing will also look at the highly controversial decisions the board has made in the development of new social studies standards this year.

The announcement comes after two state board meetings in which board members vandalized nearly a year’s worth of work by classroom teachers, scholars and others in drafting new social studies curriculum standards. The result has been a series of absurd changes that have turned a curriculum document almost into a political manifesto promoting ideological agendas of the board’s powerful far-right faction.

On March 11, for example, the board deleted Thomas Jefferson, who argued that “a wall of separation between church and state” is essential to liberty, from a world history standard on important Enlightenment thinkers. The board’s religious-righters, rejecting the constitutional principle of separation of church and state, also rejected a proposed government standard requiring students to “examine the reasons the Founding Fathers protected religious freedom in America by barring government from promoting or disfavoring any particular religion over all others.”

The board has also decreed that “capitalism” is a negative word, requiring that classrooms use “free enterprise system” instead; removed references to “democracy” in discussing the American form of government, insisting that the term used in classrooms be “constitutional republic”; deleted other references to individuals, such as Dolores Huerta, because of their political beliefs; and even changed a standard to suggest that Joseph McCarthy’s political witch hunts in the 1950s were justified. (See a list of some of the worst changes here.)

Martinez Fischer was particularly critical of the board’s lack of respect for classroom teachers and scholarly experts. He noted that board members with no academic credentials are making curriculum decisions based on what limited knowledge they possess or can readily find on their own.

“Nationally renowned experts are being replaced by what you can find on Wikipedia and the Internet,” he said, joking that board members at meetings have seemed engaged in a contest to see who can most quickly Google information from their laptops when debating the standards. At its January meeting, in fact, the board deleted from the third-grade standards a reference to the late author of a popular children’s book, Brown Bear, Brown Bear, What Do You See? Based on an Internet search, one member confused the author’s name with that of another man who wrote a book about Marxism — so out he went. An embarrassed board added the author back to the standards in March. (Martinez Fischer held up a mock book covers that read State Board, State Board, What’s Wrong with Thee? and State Board, State Board, Let Me Be.)

The public hearing will be open to other House and Senate members from both major political parties who want to come, Martinez Fischer said. MALC sent a letter today inviting Gail Lowe, the state board’s chairwoman, to testify and answer questions from lawmakers at the hearing. MALC is also inviting scholars and other experts to speak.

In response to similar controversies, the Legislature in 1995 limited the state board’s ability to edit textbook content. Martinez Fischer reminded reporters that state lawmakers considered a number of bills in the 2009 legislative session that would have further limited the power of the board. In addition, the Legislature must appropriate funds for the purchase of textbooks written to meet the board’s approved curriculum standards.

Martinez Fischer was joined at the press conference by state Rep. Abel Herrero, D-Corpus Christi, and two historians from the University of Texas at Austin and Texas State University-San Marcos.

13 thoughts on “Lawmakers to Texas Ed Board: It’s Time to Talk”