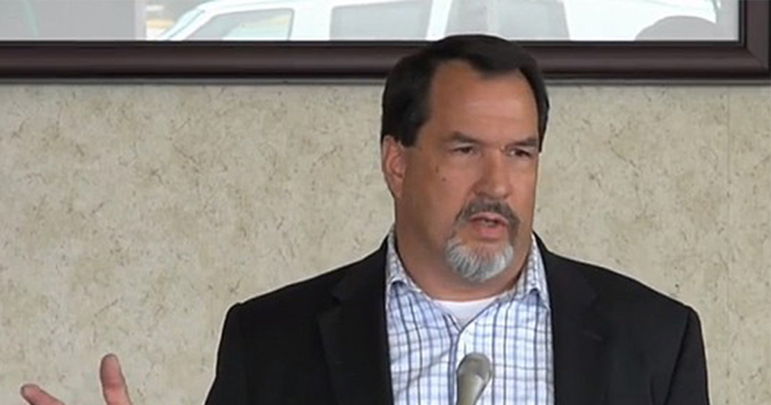 Dave Welch, head of the rabidly anti-LGBT Houston Area Pastor Council, is spittle-spewing angry that the Boy Scouts of America is changing its name to Scouts BSA and allowing girls to join.

Welch declares that the destruction of the Boy Scouts is now “essentially complete” and sees the name change as part of an effort aimed at “eradicat(ing) the lines between male and female.”

“It is another institutional rejection of any premise that we are created by God as distinctively male or female as described in the book of Genesis and confirmed by biology, medicine and science, starting at the chromosomal level.”

There’s some irony in Welch using both religion and science to attack Scouts BSA. He’s a science denier, having spoken out in favor of teaching so-called “weaknesses” of evolution in public schools, even going so far as to viciously attack Christians who disagree with him:

“I assert that any so-called Christian and most emphatically any member of Christian clergy who embraces the deception of Darwinian evolution is no more a Christian than the chimpanzees from which he or she claims to have evolved.”

That wasn’t the only time he attacked other people of faith. In 2010 he had this to say about clergy who opposed a hateful anti-Islam resolution — which Welch supported — at the State Board of Education:

“Once again, my guns are aimed at the pathetic preachers, pitiful pastors and compromised clergy that TFN, AU, ACLU and their ilk trot out as props for their leftist agendas. They disgust me.”

He has called LGBT folks a “morally depraved special interest group” and denounced former Houston Mayor Annise Parker as a “sodomite” who promoted “an agenda which we believe to be contrary to the concerns of the community and destructive to the family.” He criticized her election (and re-election) as evidence that Houston was a “sin-sick city.”

Welch was also one of the major leaders of the rancid campaign to overturn the Houston Equal Rights Ordinance, promoting the lie that anti-discrimination protections in HERO would leave women and children open to assault in public restrooms.

And, of course, he opposed the Boy Scouts’ earlier decision to allow gay scouts, opposition he repeated in his new screed against Scouts BSA:

The insidious takeover of the voting leadership of the Boy Scouts of America by radical LGBTQIA activists and sympathizers led to the open acceptance of homosexual scouts and scoutmasters just a few years ago, a 180 degree turn from it’s historic standard for boys to be “‘morally straight.'”

He again smears people who disagree with him by claiming they are out “to steal and destroy our children”:

“The only effective voices to oppose the intentional destruction of God’s created order are courageous pastors and God-honoring parents and citizens, fully engaged and calling God’s people to go to the front lines in redeeming our major institutions from the dark and evil forces that are desperately working to steal and destroy our children.”

We should note that Welch isn’t just an isolated hate-monger in Houston. In 2014, Greg Abbott — now governor but then Texas attorney general — chose to  accept an award from Welch’s extremist organization. Welch has also allied himself with Lt. Gov. Dan Patrick’s anti-LGBT campaign in the Texas Legislature. It’s tragic that the state’s highest elected leaders have aligned themselves with one of the most divisive and hateful voices in Texas.