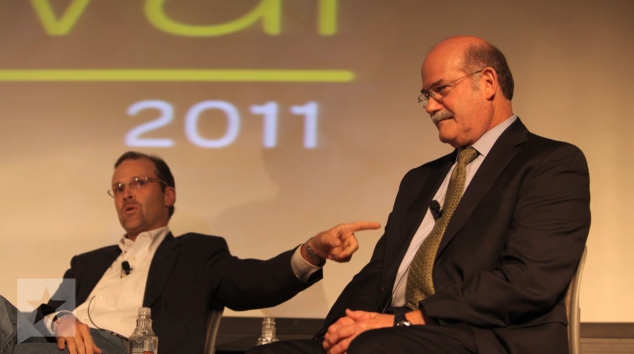 The picture above of current Texas State Board of Education member Thomas Ratliff, R-Mt. Pleasant, pointing (sort of) at former board chair Don McCleroy, R-Bryan, is not directly related to what you’re about to read, but it will be what springs to mind when you’re done with this blog post.

A few weeks ago TFN President Kathy Miller shared a dais with McLeroy for a panel discussion on the SBOE during the Texas Tribune’s Tribune Festival. That’s where McLeroy blamed the culture wars at the SBOE on his and the far right’s willingness to put personal agendas and politics above the best interests of Texas’ schoolchildren.

Just kidding. McLeroy actually blamed TFN and what he called our “incendiary” language for sparking the culture wars at the SBOE. That’s right, he blamed TFN. Let that one sink in for a moment.

Here was McLeroy’s response when panel moderator and Tribune reporter Morgan Smith posed the question of whether the culture wars and politics distract board members from the important work before them (audio of the full conversation from the Tribune):

Back in 1994 you had the rise of prominence and political clout of conservatives on the State Board of Education. That triggered a response from a lot of people that I would call secular-minded. And they were real concerned that these religious conservatives would put forth views — they would propose their own views over all others. And what happened was that you saw these people get organized. I would say they were the one’s that initiated the culture war. “Freedom” even became their middle name.

Really, Dr. McLeroy? TFN is behind the culture wars at the state board? Well, let’s look at the record here. It’s McLeroy who has attacked public education, sharpened religious divisions on the state board, promoted a book that labels as “monsters” parents who teach their children about evolution, thinks science classes should teach about the supernatural, and said “education is too important not to politicize.” TFN Insider has documented much more from McLeroy, which you can find here. And here are just a few of the video clips of McLeroy pushing the culture wars:

TFN is the incendiary fuse in the culture wars? Oh really?

Of course, it would be unfair to lay everything at McLeroy’s feet. We would argue that current board chair Barbara Cargill questioning the faith of fellow board members is also pretty incendiary. So was the baseless Muslim-bashing resolution the board passed last year. There are many other examples of the board’s far-right members and their political allies putting the culture wars ahead of educating Texas kids.

Indeed, it’s the religious right that demanded hundreds of changes to health textbooks in 1994-95, including the removal of line drawings of breast self-exams for cancer, a photo of a woman carrying a briefcase (because it didn’t conform to certain notions of gender norms) and any information about contraception. It was the religious right that demanded, back in the 1990s, that the Permanent School Fund stop investing in Disney stock because of films religious conservatives found offensive. It was the religious right in 2003 that wanted to reject new biology textbooks because they didn’t include creationist arguments against evolution. We could go on, but we think you get our point.

But let’s put all these questions of who said what aside for a moment and ask something even more important: Who are the elected officials here? Who are the people who at the end of the day have the real power to say, “We’re not gonna go there; let’s stay focused on what we’re here to do: just educate our kids”?