After we first published Mary Lou Bruner’s social media posts, the Republican Texas State Board of Education candidate out of District 9 defended her comments in a couple of ways. She began by saying, on Facebook, that she was taken out of context. What possible context there could be for insisting that the president of the United States once paid for drugs by working as gay prostitute is beyond us. But here’s how Bruner explained the prostitution comment to TV station KTRE:

“I don’t know, I guess I’m assuming it was true; you’re assuming some people assume that it’s false, I mean, who knows.”

Bruner then told the Texas Tribune that she was unapologetic and proud of everything she has said. It is odd, then, that she would start deleting the posts and has now taken her Facebook profile private. But no worries, we have more of her posts.

Here are some highlights, taken before Bruner closed her account to the general public.

On the Confederacy and the song “Dixie”
Last June, a week after a white supremacist shot and killed nine people at a church in Charleston, Bruner took to Facebook to blame the media for a “sudden push” to erase “Southern Heritage” from society, and she also had something to say about the controversial song “Dixie.” 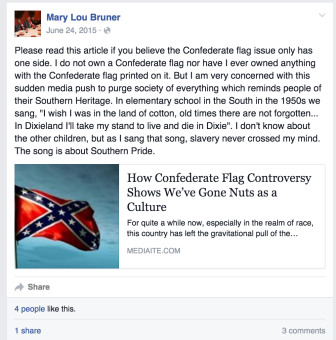 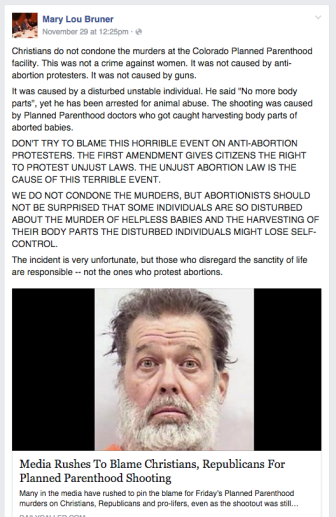 The other “Obama was a gay prostitute” post
You already know about this post accusing President Obama of being a former gay prostitute, but that wasn’t the only time Bruner said it. There was also this, in which she began by saying that the Mormon church had informed the president of his family’s alleged slave-owning past. 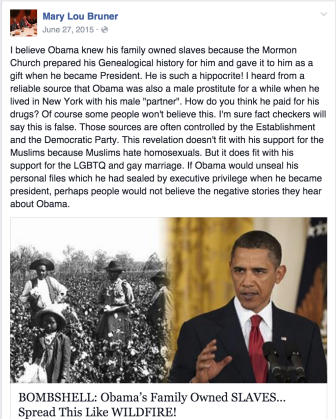 George P. Bush gave the Alamo to the U.N.
The United Nations Educational, Scientific and Cultural Organization (UNESCO) has declared the Alamo a World Heritage Site. The designation is a recognition that a site is of value to humanity, and it should be protected and preserved. Places like the Taj Mahal and Machu Picchu have received the same designation. But right-wing activists see something more nefarious. Bruner blames Texas Land Commissioner George P. Bush. 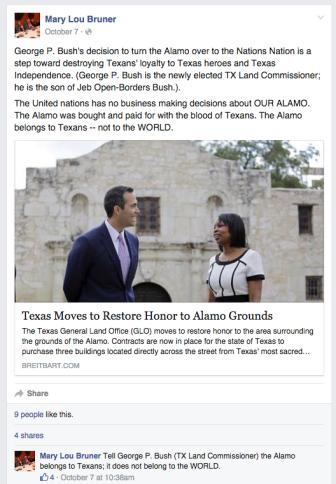 Common Core = Nazism?
Bruner shared this image, first posted by religious-right activist and former state Rep. Rick Green, of Dietrich Bonhoeffer, the German pastor executed for his opposition to Hitler and the Nazis. But in doing so, Bruner added comments about her opposition to the Common Core State Standards, a favorite target of far-right activists. Opposing an educational initiative endorsed by the National Governors Association and voluntarily adopted by 42 of the United States (not by Texas, though) is one thing, fighting a genocidal regime is another. 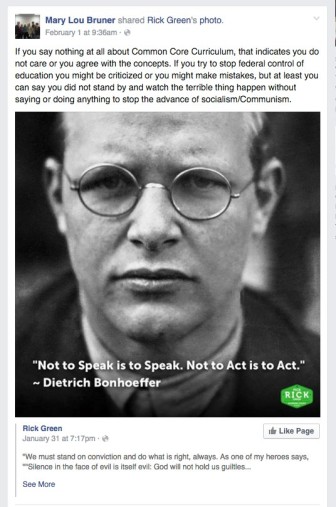 Here’s a picture of House Speaker Paul Ryan with a beard
And here’s the possible explanation. 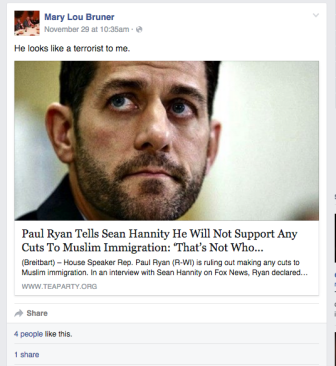 And one final thing 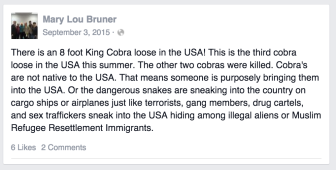 Bruner stands a good chance of having a say in what 5 million Texas children learn in public schools. On Tuesday, she narrowly missed winning the primary outright, beating Keven Ellis by 17 points. Bruner and Ellis will meet in the May runoff. The winner faces Democrat Amanda Rudolph in the November general election for the right to represent the Republican-leaning East Texas district.