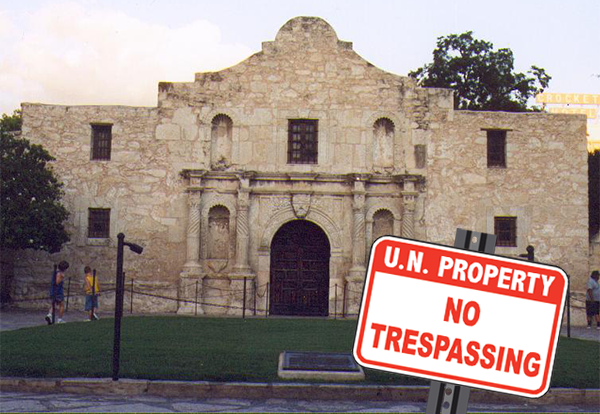 Every two years the Texas Freedom Network takes a look at the Texas Republican Party platform because, as we say around here, that platform has become a biennial exercise in extremism.

For several cycles now, the platform has been co-opted by far-right activists, and each platform can tend to look like a love letter to the extreme right of the state party.

You can read the 2014 TFN analysis here.

This year’s platform, adopted at the state party’s June convention, was given lots of press for a controversial plank on “reparative therapy,” a form of “treatment” that supposedly turns gay people straight. Professional medical associations have deemed the therapy to be harmful, abusive quackery, and some state governments have even moved to bar its use.

But the platform still has some hidden gems that didn’t get as many headlines. This year, for example, the party wants to make sure the United Nations keeps its hands off the Alamo. Here is a plank that was added to the 2014 Texas GOP Platform:

United Nations World Heritage Sites – We oppose the transfer of the Alamo and the other Franciscan missions to the United Nations. We urge the Texas General Land Office to respect the hallowed ground of the Alamo and what it means to the people of Texas. We support maintaining control of these historic sites in Texas hands, and we oppose granting jurisdiction and sovereignty over Texas’ cultural sites to any international body.

A quick Google search will point you to the genesis of this plank: a tea partier with an email account.

Last September former San Antonio Tea Party President George Rodriguez sent an email with the subject line, “The New Battle of the Alamo,” and warning that the Alamo could fall under the control of the United Nations.

What was actually happening is that the Alamo was up for nomination as a United Nations Educational, Scientific and Cultural Organization (UNESCO) World Heritage Site. The designation is simply a recognition that a site is of value to humanity, and it should be protected and preserved. Not radical stuff. We’re willing to bet that most mainstream Texans would welcome such a recognition not just of the Alamo, but of other Texas monuments.

But back in tea party land the story, baseless paranoia and all, was being forwarded. It festered and eventually wound up on Infowars and other right-wing blogs where many conspiracy theories go to be famous for 15 minutes before dying.

This story didn’t die, though. It survived long enough that even Texas Land Commissioner Jerry Patterson, a Republican then running for lieutenant governor, had to knock down the ridiculous claim, calling it “horse hockey.”

It has been almost a year since Rodriguez sent that email, and the story still lives. Thanks to the Texas GOP platform, which is willing to give a nod and a wink to conspiracy theorists like birthers, we’re guaranteed that the story will live on for at least two more years.

That’s because in today’s state GOP, all conspiracy theories are welcome, no supporting evidence required.