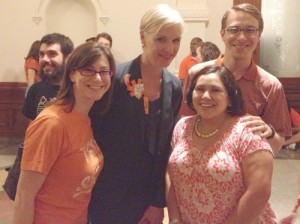 As expected, Texas Gov. Rick Perry has announced that state lawmakers will be back in Austin for a second legislative special session starting July 1. Lawmakers will again take up critical transportation and criminal justice bills that they failed to pass in the first special session because the governor and far-right legislators were more interested in promoting the war on women.

During the first special session, religious-righters had arrogantly assumed that they could easily ram through passage of their extreme agenda — including legislation interfering in the personal medical decisions women make with their doctors about whether and when to have children. But they suffered a painful defeat in a raucous Senate chamber Tuesday night.

There were a lot of heroes responsible for Tuesday’s historic victory for Texas women. Sen. Wendy Davis, D-Fort Worth, held the floor by courageously speaking against Senate Bill 5 for 11 hours. Other Democratic senators, including Kirk Watson of Austin, Rodney Ellis of Houston, Royce West of Dallas, and San Antonio’s Leticia Van de Putte (who arrived in the chamber just hours after her father’s funeral), also played critical roles in defeating SB 5.

But the staff of our incredible coalition partners — Planned Parenthood, NARAL Pro-Choice Texas, Annie’s List and The Lilith Fund for Reproductive Equity — were the unsung heroes of the incredible mobilization over the past week. They rallied thousands of grassroots activists — both at the Capitol and in communities across the state — to stand up against the extremists attacking women and their access to reproductive health care.

TFN staff and supporters were among those activists. (The accompanying photo shows TFN staffers with our founder and current Planned Parenthood President Cecile Richards at the Capitol late Tuesday night.) We watched religious-righters hurl vicious insults at us all day — “feminazis,” “whiners,” even “terrorists.” But it became clear to us that their war on women has awakened a sleeping giant in Texas. (This slideshow from the Texas Tribune recaps yesterday’s dramatic events.)

Tuesday night confirmed what TFN has been saying for 18 years: grassroots action has the power to defeat the religious right in Texas. But this fight is far from over. Defeating the religious right in the second special session will be even harder. They have vast sources of funding and obedient legislators (as well as Gov. Perry) pushing their divisive and intolerant agenda.

But no matter what happens over the next four weeks, Tuesday night was special. After so many years of the religious right relentlessly advancing its agenda in Texas, perhaps we have reached a turning point. But activists across Texas — including those who spent long hours at the Capitol over the past week, who made telephone calls and sent emails to their legislators, and who talked to friends and family about why the war on women has to end — must stay engaged.

The road ahead will be filled with tough battles, and we’ll suffer defeats. But we will also see more victories as we work together to bring important changes to Texas. Tuesday night showed us how.

19 thoughts on “Was Tuesday Night a Turning Point in Texas?”