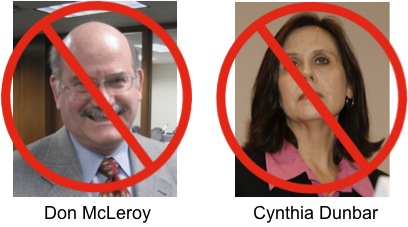 First, the good news: At least two members of the Texas State Board of Education’s far-right faction won’t be there in 2011. Cynthia “Public Education Is a Tool of Perversion” Dunbar, R-Richmond, got so much heat for her extremism — including outrageous attacks on public schools — that she decided not to run for re-election. Then Don “Somebody’s Got to Stand Up to the Experts” McLeroy, R-College Station, lost his re-election battle to Thomas Ratliff, R-Mountain Pleasant.

Mixed news: Brian Russell, the Austin attorney Dunbar recruited to run for her seat, was forced into a Republican runoff against Marsha Farney of Georgetown.

Bad news: San Antonio incumbent Ken “Dog-Cat” Mercer won his Republican primary race against challenger Tim Tuggey of Austin. That means the board’s far-right faction will still have at least five and as many as six members in 2011 — still be enough to distrupt and distract the board’s attention with “culture war” nonsense.

Even so, yesterday’s elections — including Bob Craig‘s win over a far-right challenger in West Texas — represented a major step forward for supporters of public education in Texas. In addition, the November general election will provide further opportunities — including challenges to Mercer (Rebecca Bell-Metereau) and to the Russell-Farney winner (Judy Jennings) — if voters want to move the board away from the fringes and closer to the mainstream.

Voters made it clear on Tuesday that they are tired of seeing the State Board of Education threaten the future of Texas schoolchildren with unnecessary and divisive “culture war” battles over curriculum and textbooks, the president of the Texas Freedom Network said today.

TFN President Kathy Miller noted that three of five far-right social conservatives lost election contests on Tuesday. A fourth was forced into a runoff. One of the defeated candidates was Don McLeroy, whom the state Senate refused to confirm for a second term as board chair in May 2009.

“Don McLeroy was right when he said this election was a referendum on what the board has done over the past four years,” Miller said. “Voters sent a clear message by rejecting the ringleader of the faction that has repeatedly dragged our public schools into the nation’s divisive culture wars over the past four years. Parents want a state board that focuses on educating their kids, not promoting divisive political and personal agendas.”

The Republican primary between McLeroy and challenger Thomas Ratliff of Mount Pleasant had the highest profile of all the state board contests. In addition to McLeroy’s defeat in District 9, Randy Rives of Odessa lost his race against incumbent Bob Craig of Lubbock in the District 15 Republican primary, and Joan Muenzler lost her District 3 GOP primary against fellow San Antonian Tony Cunningham. Both Rives and Muenzler were backed by far-right groups such as WallBuilders and the Texas Pastor Council.

In addition, Austin attorney Brian Russell, who Cynthia Dunbar, R-Richmond, recruited to run for her District 10 seat, was forced into a Republican runoff against Marsha Farney of Georgetown.

District 5 incumbent Ken Mercer, R-San Antonio, was the only candidate backed by religious-right groups who won his primary on Tuesday.

The current state board has 10 Republicans and five Democrats. Seven of the Republicans typically vote as a bloc on controversial social issues, such as attacking instruction on evolution science classrooms and emphasizing conservative religious arguments in social studies classrooms. With McLeroy’s defeat, that number will drop to six in 2011.

The board’s work has been bogged down in recent years by curriculum battles in science, social studies and public school Bible classes. Under the current schedule, the board is scheduled to adopt new science and social studies textbooks in 2011 and 2012.