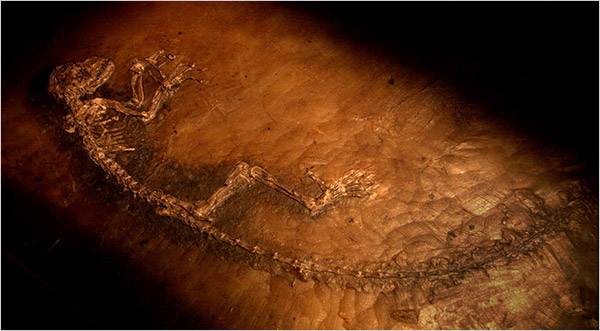 During the recent debate over science curriculum standards in Texas, State Board of Education member Ken Mercer argued that science hadn’t found transitional fossils that would back up the science of evolution. He demanded to know why scientists couldn’t show him a “dog-cat” or a “cat-rat,” for example.

They were met by skepticism and not a little derision by Mr. Mercer and other creationists on the board.

Now European scientists are pointing to yet another transitional fossil — although not quite Mr. Mercer’s ‘dog-cat’ — that creationists will ignore. From CNN:

Scientists hailed Tuesday a 47-million-year-old fossil of an ancient “small cat”-sized primate as a possible common ancestor of monkeys, primates and humans.

Scientists say the fossil, dubbed “Ida,” is a transitional species, living around the time the primate lineage split into two groups: A line that would eventually produce humans, primates and monkeys, and another that would give rise to lemurs and other primates.

An Associated Press story about the same finding quotes researchers who believe another fossil found in China provides far better evidence of a transitional species in the early monkey-ape-human ancestral line.

11 thoughts on “About That ‘Dog-Cat’ Thing Again…”