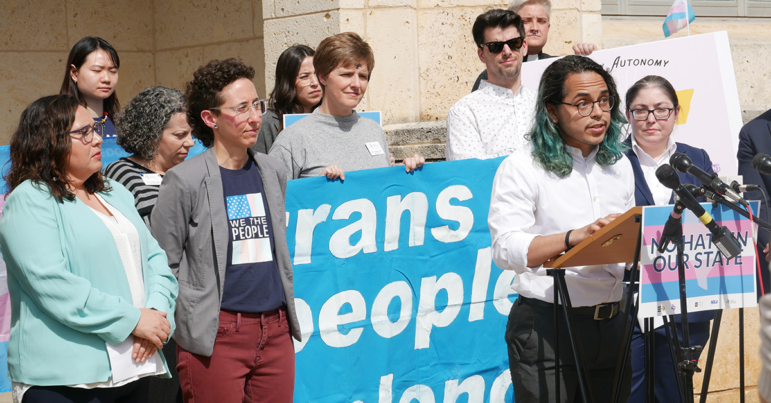 Today is Transgender Day of Visibility. This year, as we celebrate the lives of transgender people and the beauty and diversity transgender Texans bring to our state, the most recent attacks demand we take action.

At the time of this writing, judges have reinstated a temporary injunction halting the state’s investigations. Still, we know our work to ensure children stay with their families and receive the healthcare they need is far from over.

We need you to join our fight for transgender Texans! We’re holding a rally at the Capitol this Saturday, April 2 in observance of #TransgenderDayofVisibility. Let’s show everyone that our transgender neighbors belong in Texas.

TFN, the Equality Coalition, clergy, and community members have been taking action since February – in the courts, holding press conferences, and testifying at a recent Texas Department of Family and Protective Services meeting. Below you will find a chronicle of the steps we’ve taken to protect transgender Texans.

For people like Kayden, gender-affirming care is life-saving. Their story illustrates just how vulnerable LGBTQIA+ kids can be to abuse when they are not accepted by their families and communities. Kayden’s testimony also highlights just how difficult it can be to access healthcare for children living within the child welfare system, even before Abbott and Paxton’s directive.

“When I was 15, I met another trans person at my school and decided to come out to everyone. When I did, my asst. principal called my father and outed me without my permission. That day, when I got home, we got into a huge fight that led to me being held down on my bed so I wouldn’t move while my father yelled at me. It got to the point where I couldn’t breathe because my dad’s girlfriend was sitting on my chest, so I screamed. My dad slapped me and told me to stop exaggerating. That day, I tried again to kill myself. The next week I told my principal about what happened at home. When I got home, my dad had apparently been told by my school that I reported him to CPS. The next weekend I overdosed on all my medication and had to go to the hospital. I went to the mental hospital for the fourth time in two months that day. My doctor knew by then that it wasn’t me, but it was my dad. So he called CPS. CPS almost sent me home after all of that. The only reason they didn’t is because I said if I went back, I’d kill myself within 24 hours.”

“Even while in foster care and being out as trans, people didn’t take me seriously. When I was 17, I decided that I wanted to be on testosterone. My caseworker was first supportive of it, but then my CASA said we needed to get a judge’s permission and that I didn’t know what I was talking about. I got a therapist’s letter, a doctor’s note, a psychologist’s note – things I didn’t need but I got them anyway. I presented them to my caseworker’s supervisor, and she said that I didn’t know what I was talking about, and nobody knew within their realm what to do. It took four months for me to get on testosterone. We ended up having to ask the regional director and they approved it. Once I got on 11 months ago, I became happy. My mental health became way better, I ended up not being on as many meds, I’ve been totally off anti-depressants now, and just everything became better. My voice is way lower than it used to be, and that makes me really happy. I was able to change my sex identifier a couple of weeks ago, and that makes me happy. I’m a man. I’m not a woman. I may have a woman’s body but I’m not a woman. And every time I get called a woman, it hurts. It makes me feel bad. And we don’t need to be attacking kids. We need them to be safe. Thank you.”

The Rev. Remington Johnson (she/her) speaks across the street from DFPS at a press conference on March 11

Rev. Johnson will speak at our Transgender Day of Visibility Rally and recently worked with TFN on an op-ed that was published in the Corpus Christi Caller-Times that was also distributed by Yahoo! News.

Rev. Erin Walter is the executive director for the Texas Unitarian Universalist Justice Ministry and a Texas Impact Board Member. She’s a passionate, active supporter of the LGBTQIA+ community and has represented the faith community with TFN at numerous events.

Emmett Schelling (he/him/his), executive director for the Transgender Education Network of Texas speaks at a press conference on March 2

Thank you to each of our coalition, clergy, and community members who keep showing up to fight for transgender Texans.

We hope you’ll join us to celebrate Transgender Day of Visibility this Saturday at the Capitol!