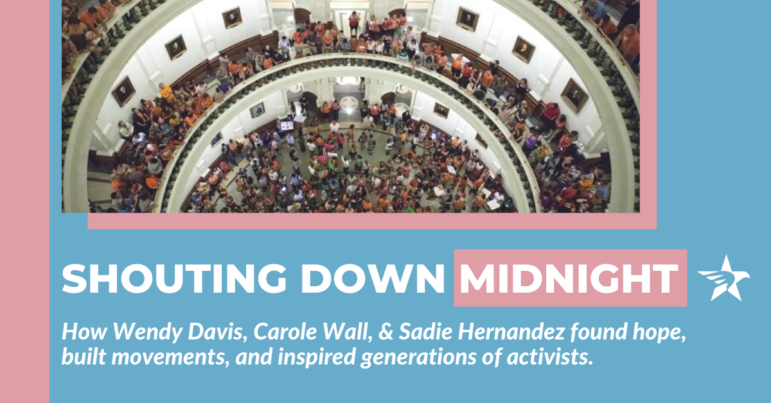 By Emily L. Witt
As the lights rose following the premiere of the new feature documentary “Shouting Down Midnight,” the film’s protagonists, Wendy Davis, Carole Wall, and Sadie Hernandez took the stage to answer questions.

They spoke about the personal impact of Davis’ historic 2013 filibuster – which the film recounts – to prevent a vote on a restrictive abortion bill, the generations it mobilized, and what comes next in a state and country that’s seeing abortion rights eroded down to nothing.

I hadn’t planned to ask a question. But when I thought of what our community of supporters needs to hear – and what I needed to hear – to keep going, my hand shot up.

“What would you say to Texans who look around at what’s happening in our state – the attacks on trans kid and families, SB 8 – and question whether or not this is still the place for them,” I asked the panel, not expecting the question to hurt so badly as the words left my mouth.

Davis asked the moderator for the mic.

At face value, “Shouting Down Midnight” is about the 2013 filibuster and Davis’ indomitable resolve to stop a bill that would’ve banned abortions after 20 weeks and imposed medically unnecessary requirements upon abortion clinics, wiping out access to abortion for many people of color, and those living on low incomes in rural areas, with little means to travel.

The 13-hour speech, which required Davis to have a catheter inserted the morning of, is more than worthy of the praise and space in the documentary. But the day of the filibuster was about so much more, and so is “Shouting Down Midnight.”

June 25, 2013, was about the collective power we hold as a community. The movements we can build with our rage. The change that can be harnessed through hope.

That day was about the strength of people like then-state Sen. Leticia Van De Putte. She left her father’s funeral in San Antonio to race back to the Capitol to raise a point of order and stall proceedings after Davis’ third strike from male senators, who took turns policing her body’s every move throughout the entire filibuster. When Van De Putte was repeatedly ignored, she demanded to be heard: “At what point must a female senator raise her hand or her voice to be recognized over her male colleagues?”

June 25, 2013, is about the people her words ignited, who chanted in the Capitol until the Senate gallery shook so ferociously that the votes for the bill could not be formalized.

One of the people in the Capitol that day was Sadie Hernandez. She was 19 and came all the way from Brownsville. It was the first political action she ever took, leading to her volunteering and eventually becoming an organizer at Planned Parenthood South Texas, serving the Rio Grande Valley, where access to all healthcare, especially reproductive healthcare, can be impossible to find. She speaks in the documentary about purchasing condoms for Planned Parenthood South Texas tabling events with her own money.

A year later, she’d become famous for protesting outside of Governor’s Mansion for three weeks when the state’s budget banned Planned Parenthood from the Breast and Cervical Cancer Services program. Gutting options for low-income and undocumented people in need of services, especially in places like the Rio Grande Valley.

Since her activist work began, Hernandez’s state senator has been Eddie Lucio Jr., a conservative Democrat who has repeatedly voted to strip abortion rights from the people in our state. He even co-authored the six-week ban currently causing people in need of healthcare to suffer.

Lucio is featured throughout “Shouting Down Midnight.” He comments during the filibuster that his faith drives his anti-abortion views in opposition to his party. This is a viewpoint that polling shows is not shared by most people of faith, who believe abortion should be legal in all or most cases. Hernandez is shown a number of times visiting Lucio’s office to advocate for his constituents, who continued to suffer over his injection of personal beliefs into policies. Lucio did not seek re-election in 2022.

Hernandez still works as a reproductive and immigrant justice organizer, and Davis mobilized a new generation of activists that day. She also uplifted the stories and experiences of people that need abortions. People that politicians like Lucio refuse to see as worthy of choice, dignity, or bodily autonomy.

Carole Wall’s was one such story, one that I personally remember hearing in 2013.

During the filibuster, Davis read Wall’s personal letter about having a late-term abortion after her doctors discovered the baby would have little chance at life. A decision she made for her family, her body, and a child she very much wanted, politicized and propagandized by men who have little value for actual human life or liberty.

In the documentary, Wall characterizes herself as someone who was not previously deeply involved in politics past voting in every election. But as she saw the reaction from people around the state and Davis herself, she found she could honor her child by telling her story. She went on to work at Planned Parenthood of Greater Texas, one shot of the documentary chronicles her first day on the job as she pulls into the lot of a Planned Parenthood in South Austin, flanked by protesters on each side of her car.

While Wall continues her work as an abortion storyteller and advocate, her current job is at Child Protective Services, an increasingly difficult role in Texas, where resources for the children of our state are virtually nonexistent. Even so, Gov. Abbott and Attorney General Ken Paxton attempt to tear transgender children from their loving homes and thrust them into a system that literally cannot provide a roof over their heads. This is how they “value the lives” of children in Texas.

“Shouting Down Midnight” does not attempt to posit that the government is our only way to care for our community. Rather, it shows us the power we already possess to care for each other, like Krithika Shamanna, another young woman featured in the doc who organized at her Texas school to ensure students had access to sanitary products.

And even as Davis paced across the Senate floor filibustering, everyday people watching on the live stream researched procedures and provided Democratic senators with the points of order needed to stall the vote.

Our power comes in forms we can’t yet imagine. We also cannot know what the future holds for abortion access in the United States.

No matter the heartbreak that may be coming, may our chants cause vibrations in the Capitol and beyond – not of defeat, but of action – as we reimagine how we can fight for each other.