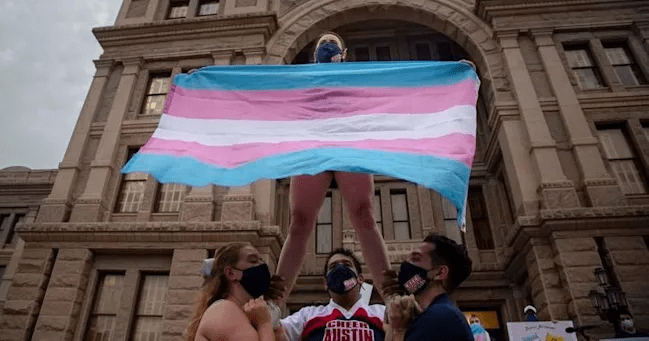 Transgender children are a blessing.

When a parent shows their child love and acceptance by making the lifesaving decisions to use their child’s pronouns, to help them find the right name, or by navigating the very private medical decisions around what gender-affirming treatments are right for them, Paxton and Abbott see this parental love and care for the family as abuse.

They have mobilized the powers of the state to harm these sacred children and their families.

It happened in plain sight, when Paxton and Abbott corrupted state law by labeling gender-affirming care as “child abuse” — directing state agencies to treat it as such, endangering a transgender child’s access to needed medical care, and making their parents subject to prosecution.

In doing so, Paxton and Abbott stand on the lie that transgender children are being harmed by a wicked wing of the left.

Their edict-activating government officials and even everyday Texans to do their bidding, stoking hatred in the souls of those who still do not see transgender people as full equals, and striking fear in the hearts of transgender children and families who have already endured so much at the hands of the Texas government – is yet another example of the dissonance between proponents of anti-LGBTQIA+ legislation who proclaim to be Christian and those who are faithfully Christ-like.

As people of faith, it is our job to tell the truth, respond in compassion, be caretakers in our community who love our neighbors selflessly, and remind everyone that there is a place for them.

The actions by Paxton and Abbott perpetuate a string of untruths told by them and Christian nationalist supporters. Their faith is winner-take-all. A domination. A flattening of anyone who does not look like them, live like them, or worship like them.

They want the world to think there is only one way to be with the divine, and by supporting transgender children and loving them, we are spreading a contagion that will infect them all with sinfulness.

The immorality of these political antics is the refusal to admit that they’ve done any harm. The answer to something that you do not understand or agree with is not to direct CPS to take children from safe homes, especially in a state that is ill-equipped to care for the children already in the system.

We are invited by the innocent, prophetic voices of these children who need us, to look inward and gain a deeper understanding of ourselves.

It is an outright lie to say that the sacred decision between parent and child to embark on the journey of gender-affirming care is child abuse.

We are called to respond with faith and truth. The body of Christ is a living, breathing, community that checks in on itself and doesn’t cut one side off from the other. It does not belong only to one group, one binary, one political ideology.

The body of Christ belongs to us all. The golden rule is that we do not “other” people.

Transgender people offer us a reminder that the world is bigger and brighter and more diverse than we ever realized.

Blessed be the children.

Blessed be their families.

Reverend Remington Johnson is an ordained Presbyterian minister based in Austin, Texas. During the 2021 legislative session, Reverend Johnson served as a spokesperson for activists and affinity groups, including Just Texas, to stop a number of anti-LGBTQ bills at the Texas Legislature.

This article originally appeared on Corpus Christi Caller-Times: OPINION: Transgender children are beloved, and was also circulated by Yahoo! News.