This is the latest in a series of blog posts on Texas Rising, the Texas Freedom Network Education Fund’s campaign to uplift the voices of the rising electorate, 18-29 year olds, across the state. 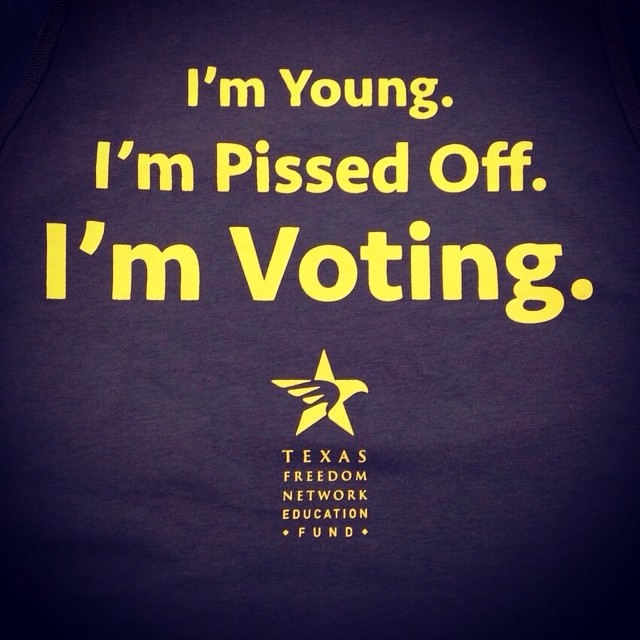 They came from every corner of the state.

Some only had to make a quick jaunt over from San Marcos, others had to endure the eight-hour drive from El Paso. Some had been working with the Texas Freedom Network for years, a few of them had only just heard of the organization. They were a cross-section of an increasingly diverse state, representing every race, religion, and sexuality. No matter their differences, these people all had one thing in common: They are young, they are pissed off, and they are most certainly voting.

The 2014 Texas Rising Summer Institute ran from July 31 to Aug. 3, and in that brief time a whole lot got done.

Reproductive justice was an essential component of the institute. Activists gave presentations on combating the cultural stigmas surrounding abortion. Many people who have abortions are degraded as “selfish” and “irresponsible,” making it easier for anti-choice advocates to say abortion is immoral. The activists turned this argument on its head, letting people who had abortions tell their stories. This helps to humanize them and give them a voice they never had in the national conversation. Allowing people to tell their abortion stories is what the 1 in 3 campaign is all about, the activists said, and their stories clearly show why access to safe and legal abortion is a human right.

Holly Doyle, the leader of TFN’s Texas State chapter, gave an incredibly insightful presentation on why reproductive justice matters. Doyle said the legal right to an abortion is meaningless without actual access to one. In order to bring about reproductive justice, we must address structural inequalities rooted in racism and classism, she said.

Reproductive justice is defined as all people having the social, political, and economic power to make healthy decisions for themselves and their communities. The goal is to transform power inequalities and create long-term systematic change. This means the movement will be led by those who are marginalized the most, like working-class Hispanic people from the Rio Grande Valley. The life of a single oppressed person will be transformed when her marginalized community has her back, the presentation explains. The reproductive justice movement has its origins in a black women’s caucus, which believed the current movement wasn’t inclusive enough. The movement exploded outward from there, resulting in the creation of groups like Forward Together and Sister Song.

Since TFN is a state-based organization, Doyle focused the next part of her presentation on the Lone Star State. The Texas Legislature has been passing anti-choice bills since 2003, when the fear-mongering “Right to Know” pamphlet began to be distributed to abortion clinics and the 24-hour waiting period was introduced. Abortion restrictions began to spring up each time the Legislature met, excluding more and more people from accessing abortions. 2005 was the year of the late-term abortion ban and 2011 forced mandatory ultrasounds on us. Already pushed to the brink, 2013’s House Bill 2 brought out the public’s outrage. Thousands of furious Texans flooded the Capitol to protest a bill effectively ending abortion access in the Rio Grande Valley and West Texas.

Doyle projected a map of Texas on the wall, with little turquoise dots pinpointing the location of abortion clinics. The August 2013 map showed a smattering of dots across the state. The March 2014 map had significantly fewer clinics, and by September 2014 the clinics had disapeared everywhere except for the major cities. As everyone in the room could plainly see, HB2 was not about protecting women’s health, but ending access to abortion throughout the state.

Doyle finished her presentation with a call to arms for student activists. Unless we can get other young progressives to vote, nothing will change, she said. Although the task might have sounded daunting, Doyle expressed confidence.

“I’m all about dismantling oppressive power structures,” she said, eliciting a massive cheer from the room.

Designed to disenfranchise people of color, low-income people, and college students, the ID law is a mishmash of bizarre rules and regulations that make little sense. For example, concealed handgun licenses and military IDs are accepted while student IDs and voter registration cards are not. It isn’t hard to see why the rules are set up this way, but would you expect anything else from the same legislature that brought you House Bill 2? Our challenge will be making sure every young progressive is registered to vote, knows when and where to vote, and has the means of getting to the polls.

The presentation was then paused for half an hour so each college could set up a voter registration plan. They set numerical goals for registering people to vote and getting those who had to sign voter pledge cards. They also hashed out plans for phone banking, block walking, and social media outreach.

Students weren’t afraid to get creative when it came to voter outreach. Texas State University activists planned a “GOTV Voterama,” a sort of carnival where their classmates can answer trivia and win prizes. They can take voter practice sessions, read from voter guides, and create their own civic engagement patches. This is just one example of student activists finding novel ways to register fellow millennials.

Voter registration outreach will pay off come November, when a flood of millennials vote for progress in the Lone Star State.

Presentations aside, student activists at the summer institute probably learned the most from meeting like-minded people. Despite demographic and geographical differences, the young activists found they could certainly relate to each other.

Audrey Perez, a student at UT-Pan American, said she enjoyed being surrounded by like-minded people.

“I loved every minute of the institute,” Perez said. “I made a bunch of new friends and we all became allies in our fight for justice.”

She said learning about the issues people face in other areas of the state is essential to making a difference.

UT-Brownsville activist Mona Lunaa said she was impressed by this year’s high turnout. Every time Lunaa attends a TFN training, she becomes motivated and her desire to create change becomes stronger.

“I would like to have a short version of the Texas Rising training at UT-Brownsville so that more students can get as pumped up as us,” Lunaa said. “Texas needs us all and it is our responsibility to make great things happen.”

UTPA student Omar Casas said the institute was a great experience. Casas said being in an environment where he could freely express his views was refreshing.

“Knowing that what I had to say wouldn’t fall on deaf ears, that was the most memorable aspect of the summer institute,” Casas said. “Even more memorable was seeing that there was literally a bus load of people who shared the same views as me.”

By the time August 3rd came around, the workshops were over, the battle plans drawn out, the presentations complete. Everyone drove back to their slice of Texas, ready to take action on reproductive justice and voter registration. They may have been back in different corners of the state, but after the summer institute, they were united more than ever.

The supporters of #HB6 and #SB7 challenged people to “read the bills and point to voter suppression.” Today, 63 civil rights orgs have gladly accepted that challenge & are releasing two joint statements outlining some of the sections that would harm voters the most #txlege pic.twitter.com/qvox…

Coach Pop is right! TFN PAC has endorsed passage of #SATX Prop. B in the May 1 elections. Early voting is happening now and continues until April 27. twitter.com/KSATRJ/s…

"Shameless" @texrising is in the @guardian for a story on the Republican-led efforts to suppress votes in Texas. bit.ly/32AsmI4 #SuppressTheVirusNotTheVote #txlege

we ended the day with a press conference in front of the Capitol, featuring some of our friends and allies. check back soon for more coverage from this event, and take action NOW to STOP #HB6 @ p2a.co/u1JvMz3 #txraction pic.twitter.com/T11U…

House Bill 6 would make voting an obstacle to Texans, and we setup an obstacle course at the Capitol today to PROVE it. Check out this sneak peek 👀 recap of our action and press conference to stop House Bill 6 at #txlege #txraction pic.twitter.com/UMJD…

It will likely be a looooooong day in the TX House tomorrow. Good thread here by @EveryTxn. We'll be keeping a close 👀 on No. 5 #txlege twitter.com/EveryTxn…

Let’s be frank—#HB6 and #SB7 are designed to make it harder for Texans to vote. They are rooted in and grown out of fear. Stop voter suppression. #txlege pic.twitter.com/FHHH…

Thank you to everyone who joined us in Houston and at the Texas Capitol, where we'll keep fighting voter suppression bills #HB6 and #SB7. #txlege #SuppressTheVirusNotTheVote twitter.com/MALCTx/s…