So why is it hard to take right-wing critics of the CSCOPE curriculum  system in Texas seriously? Check out this recent newspaper advertisement published by a Tea Party group near Austin: 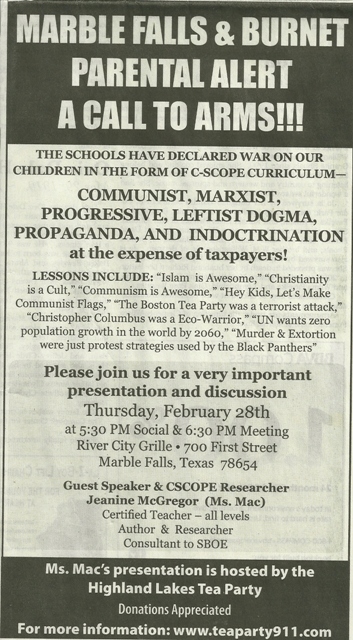 “The schools have declared war on our children in the form of C-SCOPE curriculum — COMMUNIST, MARXIST, PROGRESSIVE, LEFTIST DOGMA, PROPAGANDA, AND INDOCTRINATION at the expense of taxpayers!”

The ad (sent to us by a TFN supporter) promoted a February 28 Tea Party event in the Hill Country town of Marble Falls west of Austin. The presenter is one of at least two who have been carrying their anti-CSCOPE circus act to Tea Party and local Republican Party events around Texas.

To recap, CSCOPE is a curriculum management tool developed through a collaboration of regional Education Service Centers set up by the state in the 1960s. The purpose of the service centers is to provide support to public school districts. CSCOPE guides districts in how to cover the state’s curriculum standards and includes sample lessons teachers can use. In recent months far-right activists have charged that CSCOPE and the educators behind it are trying to indoctrinate Texas children with Marxism, radical Islam and a host of other demons. Some have even compared CSCOPE to Nazi mind control. You can read more about the anti-CSCOPE witch hunt here.

This advertisement’s list of supposed “lessons” in CSCOPE is a classic example of the absurdly distorted claims made by the program’s critics. These hair-on-fire claims by right-wing activists have increasingly overshadowed legitimate concerns other critics might have about transparency and the quality of some program materials. Even so, some elected officials — including Dan Patrick, R-Houston, chair of the Texas Senate Education Committee — have aided the witch hunt. Just this week State Board of Education Chairwoman Barbara Cargill, R-The Woodlands, appointed a board committee to review the CSCOPE materials. The committee is scheduled to start later this month. Stay tuned.