One of the worst things about political witch hunts is that they don’t end when the victim surrenders. No, the hunters often aren’t satisfied until the victim is burned at the stake. But sometimes the hunters sound so extreme that they become almost a parody of themselves. One can only hope that’s what is happening in the bizarre, manufactured “controversy” over a curriculum management system that has been developed for public schools in Texas.

That system, CSCOPE, was developed through a collaboration of regional Education Service Centers. The state set up those centers back in the 1960s to provide support for school districts. The intent of CSCOPE is to help school districts teach curriculum standards adopted by the State Board of Education (SBOE) for all public schools.

But last year right-wingers in Texas began screaming that CSCOPE has a more nefarious purpose. They claim that the program has an anti-American, Marxist, pro-Islamic and anti-Christian agenda. Some critics have even compared it to Nazi mind control programs. The educators who worked on CSCOPE, many of whom have taught in Texas classrooms, have been stunned by the ferocity of the attacks and the gross distortions of their work.

A public hearing of an SBOE committee last November seemed to clear up a number of issues, including whether parents have access to lesson materials used in CSCOPE. Even some state board members — hardly liberals — seemed satisfied with what they heard from the CSCOPE team (and from teachers, some who like CSCOPE and some who don’t). But, predictably, the relative peace in this new “culture war” battle didn’t last.

In January the Senate Education Committee held another public hearing on CSCOPE. That hearing attracted the hair-on-fire crowd behind many of the wildest claims about the program. The following week, Sen. Dan Patrick, the Republican chair of the Education Committee, announced that he had come to an agreement with CSCOPE. In short, the CSCOPE people surrendered on just about every point (valid or not), including voluntarily offering their materials up for review by the SBOE.

But, predictably (again), the witch hunt has continued. In fact, the agreement between CSCOPE and Sen. Patrick seems only to have emboldened the hunters. Sure enough, on Sunday one of CSCOPE’s critics posted a new piece on World Net Daily, a right-wing website that promotes birther conspiracies about President Obama and other right-wing fantasies that bubble up from the fever swamps. The new piece (with the screaming headline “Students Made to Wear Burqas — in Texas“) claims that a CSCOPE lesson used by teachers in the Southeast Texas town of Lumberton has been forcing students to wear the outer garment covering worn by many conservative Muslim women. The article even includes a photo of students, dressed in burqas, standing in front of a classroom whiteboard. The story goes on to make other breathless claims about what students are supposedly learning about Muslims.

But as the Austin-based political news website Quorum Report (subscription required) reported Monday afternoon, Lumberton Independent School District officials have released a statement countering the charges. According to the statement, the lesson at issue didn’t even come from CSCOPE. Moreover, the lesson was part of a discussion on world religions and cultures required by the SBOE’s curriculum standards for high school world geography. From the school district’s statement:

“The lesson that was offered focused on exposing students to world cultures, religions, customs, and belief systems. A description on the whiteboard behind the students show the splits in religions: Islam (Sunni and Shia), Judaism (Reform, Conservatives, and Orthodox), and Christianity (Catholic, Orthodox, and Protestant). Clothing expresses the individual culture. The lesson is not teaching a specific religion, and the students volunteered to wear the clothing.

The portrait focused only on Middle Eastern attire and the students are wearing variations of this customary attire found in the Middle Eastern culture. This portrait does not reflect the entire aspect of the lesson. The lesson encompassed diversity education so students receive a firm understanding of our world and why people are motivated differently.”

This isn’t the first time CSCOPE critics have engaged in this kind of hyperbolic distortion. In fact, the same Sunday article on World Net Daily continues by pointing to other lessons CSCOPE critics don’t like. One, a lesson on “New Systems of Economic Thinking” in the 18th and 19th centuries for a world history class, includes an illustration showing someone walking up the stairs. The WND article claims the illustration (shown below) teaches students that communism “is the highest attainable economic system and that capitalism is merely an evolutionary step on the ladder.” No, it doesn’t. In fact, the illustration clearly labels the staircase, “Government Control and Planning.” The illustration is simply showing that capitalism is a system with the least government control while communism has the most. The claim that the lesson is promoting communism over capitalism is simply a fabrication created by paranoids (or cynics who are trying to exploit the paranoia of others). 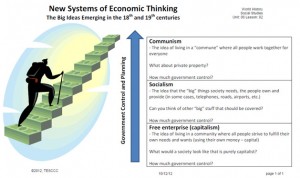 We fully expect the anti-CSCOPE brigades will still have some objection or another to this lesson. Their crusade to portray the program as Marxist (and anti-American, and anti-Christian, and…) will continue for quite some time. In fact, we’re sure they’re firing up their torches. But it’s not too late for responsible elected officials — both in the Legislature and on the SBOE — to stand up and finally say: “Enough.” Any valid concerns about transparency and parental access to CSCOPE materials can easily be settled, as the agreement between the CSCOPE team and the Senate Education Committee chairman demonstrated. But the bizarre and distorted attacks on CSCOPE are just another example of why the rest of the country increasingly sees public education in Texas as influenced too heavily by political extremists with a lot of time on their hands.