Here are some of the week’s most notable quotes culled from news reports from across Texas, and beyond. 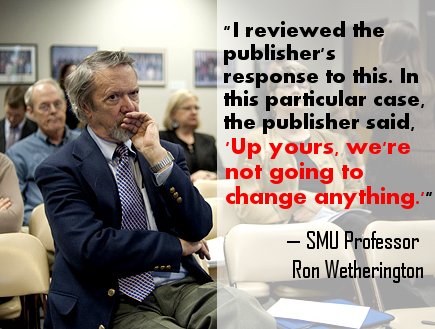 If you believe the dateable rules and are ready to commit to the list, then read on brave one! This commitment is between you and your God. He knows what is in your heart and He will help you stick to the commitment.

From an abstinence-only sex ed program used in the Canyon Independent School District in the Texas Panhandle, comparing non-virgins to used toothbrushes and chewed gum.

People want to marry a virgin, just like they want a virgin toothbrush or stick of gum.

Rafael Cruz, father of Sen. Ted Cruz, from a speech earlier this year in which he said Hispanics are uninformed and have been deceived.

Well, the same thing is true of the black population.

From yet another Rafael Cruz speech in which he said that atheism leads to sexual abuse of children.

Texas Comptroller Susan Combs, a Republican, on her party’s problem in communicating with women.

Texas Gov. Rick Perry, taking a jab at New Jersey Gov. Chris Christie. Perry and Christie could face each other for their party’s presidential nomination in 2016.

If Americans want to inspire and educate the next generation of scientists, innovators and informed citizens, we need to strengthen the teaching of science and provide support for — and encouragement to — science teachers as they do what they’ve been trained to: teach science, not religion or personal non-scientific views. We also need to provide teachers with the quality resources they need to teach science, including textbooks that include evolution as a unifying concept.

Televangelist Kenneth Copeland during a conversation with David Barton, saying soldiers should never experience guilt or post-traumatic stress disorder after returning from serving in the military.

Any of you suffering from PTSD right now, you listen to me. You get rid of that right now. You don’t take drugs to get rid of it. It doesn’t take psychology. That promise right there will get rid of it.

But for them to denigrate the suffering of men and women traumatized by war — and to claim Biblical support for their callow and doltish views — is both shocking and unconscionable. Rather than downplaying the pain of PTSD, they should be asking God to heal our brothers and sisters.

Joe Carter, the communications director for the Southern Baptist Convention’s Ethics & Religious Liberty Commission, reacting to David Barton and Kenneth Copeland telling soldiers they can “get rid of” PTSD simply by reading the Bible.

Barton is still, inexplicably, trusted by many conservative evangelicals, he has himself built his reputation on twisting and misrepresenting historical documents for ideological and propagandist purposes. For Copeland and Barton to resurrect this ‘blame the victim’ trope and coat it with the veneer of Biblical warrant is Satanic.