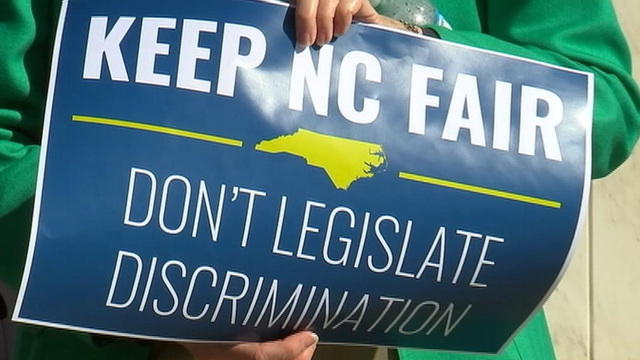 The backlash from business and civil liberties advocates over North Carolina’s new law encouraging discrimination against LGBT people is getting bigger and hotter. So religious-right groups are focusing their efforts in support of the law on the same dishonest and disgusting argument they used to defeat the Houston Equal Rights Ordinance — that barring discrimination against transgender people endangers women and children in public restrooms.

Here’s an email blast from one group, Texas Values, today:

“Gov. Pat McCrory of North Carolina is under a lot of pressure from activists on the left — all because he signed a bill into law that protects women and children from being forced to share bathrooms with men. The widely supported N.C. law stops men from going into women’s restrooms, showers, and locker rooms, and it stopped a dangerous bathroom ordinance in Charlotte, similar to the law Houston voters resoundingly defeated at the polls last year, from going into effect.”

Supporters of the North Carolina law were already spreading that kind of political filth. Now they’re using it almost exclusively. But it’s a vicious lie.

About 200 cities and numerous states already protect transgender people against discrimination in public employment, housing and public accommodations. Yet supporters of North Carolina’s hateful law can’t point to any legitimate examples of someone using anti-discrimination laws to assault women and children in public restrooms.

North Carolina’s law goes way beyond bathrooms anyway. It allows businesses and individuals to use religion as an excuse to fire, evict or deny service to anyone who is lesbian, gay, bisexual or transgender. It bars any local governments from adopting ordinances that protect against anti-LGBT discrimination and repeals such ordinances that have already passed.

It gets worse. The new law — rushed through the state’s legislature in less than a day — eliminates the right of North Carolinians to sue in a state court if they believe they have been discriminated against on the basis of race, religion, age, gender and other characteristics usually covered under civil rights laws.

And on top of that, North Carolina’s new law prohibits local governments from increasing the minimum wage within their jurisdictions.

Religious-right groups like Texas Values are using fear and hate against transgender people to cover up just how sweeping and extreme this North Carolina law is. And they want to pass the same kinds of laws in Texas in the 2017 legislative session. Don’t be fooled — they will lie to get what they want.