Texas state Rep. Matt Krause, R-Fort Worth, one of the most anti-LGBT lawmakers in the Legislature, took to Facebook today to criticize those who call the Orlando massacre a hate crime targeting LGBT people. He suggests that the sexual orientation of the victims didn’t matter — that maybe the shooter simply thought the bar was a good place to slaughter people because it’s a “gun free zone” or a place “where sounds are hard to decipher and lights are low”:

“The only salient fact is that the lives of 50 innocent people were taken on Saturday in a cowardly act of terrorism. The hatred is in the act, not the thought that might have preceded it. It doesn’t matter why this man picked this particular target – he could have had a hatred towards the LGBT community, he could have known it was a gun free zone, he could have picked it on a whim because he knew a lot of people would be in a small setting where sounds are hard to decipher and lights are low. There are any multiple of reasons he picked this location. In the end, it does not matter. Again, all that matters is that 50 lives were taken.” 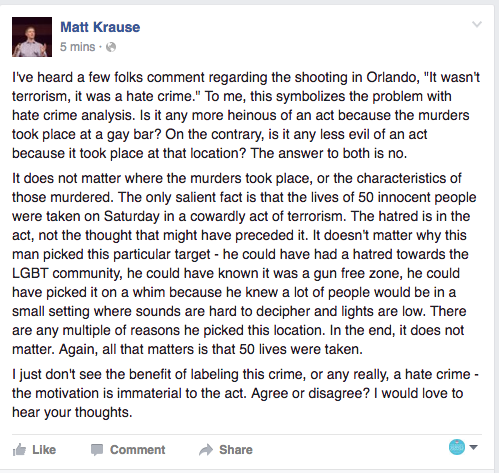 It’s hard to imagine Krause, who notes on his campaign website that he gave his life to Christ as a child, would have the same reaction if a Muslim shooter chose to massacre people at a Christian church. In fact, that would also be a hate crime in which the murderer chose his victims because of who they are and to terrorize their entire community.

But it’s not surprising that Krause wants to shift the focus from the victims of the Orlando attack. He wants to enshrine in the Texas Constitution the right of individuals and businesses to use religion as an excuse to discriminate against LGBT people. Last year the former attorney for Liberty Counsel, which the Southern Poverty Law Center identifies as an anti-LGBT hate group, equated allowing that kind of anti-LGBT discrimination to protecting Jewish shop owners from having to serve Neo-Nazis.

And Krause isn’t the only conservative twisting himself into knots in an effort to, as the online magazine Slate puts it, essentially erase LGBTQ people from this horrible attack. It’s also not a problem confined just to America.

What happened in Orlando was, as President Obama has said, “an act of terror and an act of hate.” The murderer deliberately targeted LGBT people. That’s the reality, even if promoting a discriminatory political agenda won’t allow Krause and others like him to acknowledge it.