In a repulsive attempt to use faith, fear and smears as political weapons, freshman Republican Congressman Francisco “Quico” Canseco of San Antonio is trying to persuade voters that he has Jesus on his side in his re-election campaign against a fellow Roman Catholic he says votes to kill babies.

Canseco’s campaign has been bombarding voters with mailers, printed in English and Spanish, attacking Democratic nominee Pete Gallego, a 22-year state legislator from the West Texas town of Alpine, on abortion, homosexuality and God. One mailer asks (on right; click to enlarge):

“If God gave Maria’s baby life, why does Pete Gallego vote to kill it?”

Another mailer (on right; click to enlarge) includes images of Jesus Christ, a baby and two men kissing and tells readers that Democratic leaders who support Gallego — President Obama, U.S. House Minority Leader Nancy Pelosi and U.S. Senate Majority Leader Harry Reid — have “said no to God,” “want abortion for underage girls” and “want marriage to be between man & man.”

The mailers call on voters to “Let Pete Gallego know these are not our values.” They include the disclaimer: “Paid For By Canseco for Congress.”

This is hardly the first time political campaigns in Texas have sent voters inflammatory anti-abortion and anti-gay mailers attacking opponents. In 2002, for example, a far-right political action committee, FreePAC, sent mailers that were even more vicious to voters in GOP primary races. Those mailers targeted moderate Republicans in the Texas House and Senate. One claimed that acting Lt. Gov. Bill Ratliff would “fight for men like Dr. Kevorkian and assisted suicide” and “supports the homosexual agenda.” The mailer included a photo of men kissing and a shirtless man in a leather harness. (See page 4 of our 2006 report, Anatomy of Power.)

In the 1990s religious-right funders paid for fliers depicting shirtless men together and accusing Democratic incumbents on the State Board of Education of promoting “homosexuality,” “lesbian adoption” and “condom usages” in public schools. 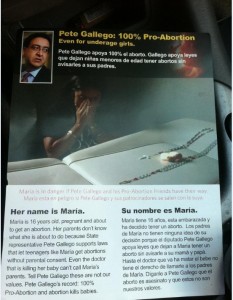 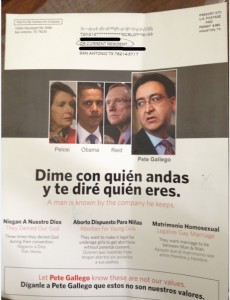