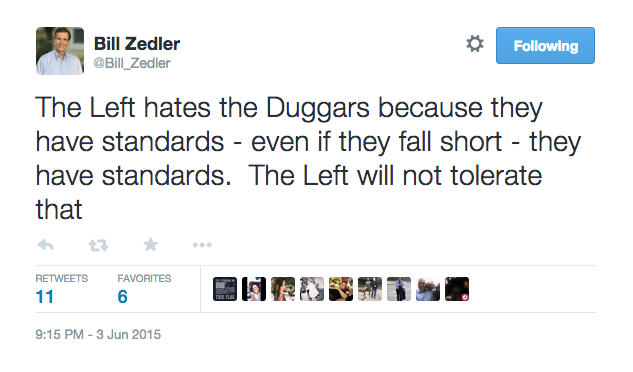 So, as you can see in his Tweet from Wednesday evening, state Rep. Bill Zedler, R-Arlington, thinks “the Left” is unfairly persecuting the Duggars — the religious right’s favorite family, with 19 kids, a TV show and — we now know — an eldest son, Josh, who admitted repeatedly molesting little girls (including some of his sisters) when he was a teenager.

Never mind, apparently, that the Duggars have cynically argued that laws protecting gay and transgender people from discrimination put children at risk of sexual assault.

And that Josh was executive director of the venomously anti-LGBT group Family Research Council Action, whose president, Tony Perkins, argues that gay people are a threat to children.

And that InTouchWeekly reports how Josh confessed his deeds to his father at least three times, that it took 16 months before his parents sought counseling for him, and that the statute of limitations had run out by the time police began an investigation.

And that Rep. Zedler essentially launched his political career more than a decade ago by arguing that a proposed Hooters restaurant in Arlington would attract sexual predators. He’s one of a number of religious-righters in the Texas Legislature who regularly proclaim their devotion to morality and “traditional values.”

Please spare us the sanctimonious political lecture about the Duggars, Rep. Zedler — unless you’re willing to admit that your words about traditional values, protecting children, and “standards” have been little more than empty political rhetoric.

18 thoughts on “Spare Us the Sanctimonious Political Lecture, Rep. Zedler”