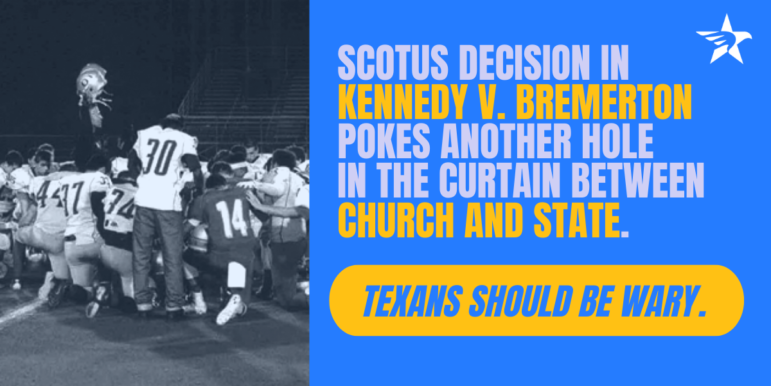 The Supreme Court is throwing a party no one asked for. Within days of overturning Roe v Wade, sparking nationwide protests, the Court has once again made an unpopular decision. In siding with former high school football coach Joe Kennedy, who repeatedly led his players in prayers immediately after games, the court is inviting public school teachers to impose their religious beliefs on students. This decision further erodes church and state separation, the cornerstone of religious freedom and a core tenet of our democracy, ensuring we are all treated equally regardless of our religion or beliefs. The separation of church and state is a shield that protects the rights of everyone and frees us to come together as equals and build a stronger democracy.

Why This Matters to Texans

Not only was Governor Abbott quick to praise the decision, Senators John Cornyn and Ted Cruz were not far behind, with Cruz calling it “a major victory for religious liberty.” At best, this is bait. Public school students and teachers have plenty of opportunities to pray at school in ways that don’t harm the religious freedom of others. The problem here is what Justice Sonia Sotomayor points out in her dissent, Coach Kennedy wasn’t praying privately: The students were in a kneeling circle, clearly participating. Framing it as a question of simply praying at the wrong time and place ignores the age and impressionability of those students around him.

Texas is no stranger to the thinning wall between church and state. Multiple testifiers at the State Board of Education have sought to cast the issue as one of religious persecution. There is nothing wrong with advocating for your child’s freedom or private prayer in public spaces, as Terry Ann Kelly did in 2010 at the SBOE. Imagine if your child felt pressured to join a religious ceremony you don’t believe in just to participate in school activities.

But we know that’s not all the extremists are trying to do. Former longtime TFN Communications Director, Dan Quinn, said back in 2010, “There’s a track record by some [board] members of pushing it as far as they can. We saw this with the creationism argument in the science standards debate. They are going to do what they can to promote a particular religious perspective—above all others—in classrooms. They are careful and deliberate in how they do it, but they definitely do it.”

Dan was right. We’ve seen the outsized influence of creationists like former board member Cynthia Dunbar, who once said, “education is inherently religious,” on public education discourse. Under the guise of defending the freedom of all religions, extremists are increasingly taking up space in our public classrooms, drowning out so many important voices.

Where Does It Go From Here?

The recent platform plank adopted by the Republican party at a convention in Houston includes language that teaches students about “the dignity of the preborn human,” and that life begins at fertilization. More than ever, it’s important to pay attention to who’s saying what, before they attain power. “If it has a heartbeat, it’s human, right?” asks Julie Pickren, a candidate for the State Board of Education.

With their aggressive takeover at the school board level, extremists and their political allies are leaving no doubt about the direction they intend to take Texas, given who’s pushing many candidates to victory. They’re winning elections where the turnout is hardly representative (as low as ten percent), and going on to make decisions that affect all Texans. We can’t let religious extremists and their lawmaker allies force everyone else to live by their beliefs. Religion is not a license to harm others.

We’ve stated this many times: all of this is intentional and coordinated. The network of religious extremists and their political allies behind Kennedy v. Bremerton includes the same people who are trying to roll back voting rights, are stoking manufactured fears about the lack of parent involvement in education decisions, are pushing harmful bills and hateful rhetoric targeted at LGBTQIA+ people, and are trying to bring about the end of public education. The plan seems to involve chipping away at the wall separating church and state until eventually, they’re indistinct from each other, paving the way for our public policies to be influenced and shaped by the beliefs of a particular faith.

This is dangerous. No student should ever be made to feel excluded — whether it’s in the classroom or on the football field — because they don’t share the religious beliefs of their coaches or teachers. We can all agree that Texas public schools are better when they serve all students without religious, racial, class, or gender biases. Given GOP legislators’ obsession with “innovating” backward, it shouldn’t surprise Texans if they try to improvise this SCOTUS ruling into a law that makes our public institutions places of doctrine rather than learning.

What is Our Role?

Even with all of the attacks we’re seeing, it doesn’t have to be like this. We have the power to dissent. We have the power to speak up for our children in our communities. We must act before it’s too late. Support students by proactively organizing on your local school board, attending regular meetings, testifying at the State Board of Education, and letting your state representatives know that you will not tolerate politically motivated bans that attempt to silence our community.

Since its beginning, TFN has acted as the state’s watchdog for monitoring far-right issues, organizations, money, and leaders. We’re continuing our efforts on monitoring the State Board of Education and advocating for public school students to receive an education that is fair, honest, and accurate.

You can be part of this vital work by joining our Teach the Truth movement today!