Searching desperately for a reason why conservative Chief Justice John Roberts sided with four other Supreme Court justices in upholding President Obama’s health care reform law on Thursday, at least some right-wingers have decided to question his mental health. Here’s what extremist Michael Savage said on his radio show:

“Let’s talk about Roberts. I’m going to tell you something that you’re not going to hear anywhere else, that you must pay attention to. It’s well known that Roberts, unfortunately for him, has suffered from epileptic seizures. Therefore he has been on medication. Therefore neurologists will tell you that medication used for seizure disorders, such as epilepsy, can introduce mental slowing, forgetfulness and other cognitive problems. And if you look at Roberts’ writings you can see the cognitive dissociation in what he is saying.”

Savage seems to have been referring to a 2007 New York Times story about medication Roberts takes to manage epilepsy. Bryan Fischer, the American Family Association’s hate-mongering media spokesman, linked to that piece in a Twitter post: 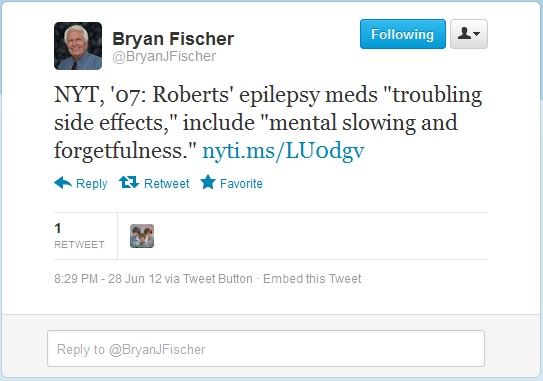 The attacks from that crowd will likely get even more vile and venomous, unfortunately.