After months of anticipation, protests, failed litigation, a constant guessing game about who — and how many — would be on stage and in the stands, Gov. Rick Perry’s and the American Family Association’s purportedly nonpolitical prayer and fasting rally, The Response, at Houston’s Reliant Stadium came and went on Saturday.

TFN was there, not to protest or anything of the like. We were there to observe and spent the day inside and outside the stadium.

While politics were for the most part left off the stage, the event was not completely devoid of politicking. What follows is a brief recap of our day at The Response and what we took away from the day of prayer and some fasting (there were some very long lines at stadium concession stands throughout the day). 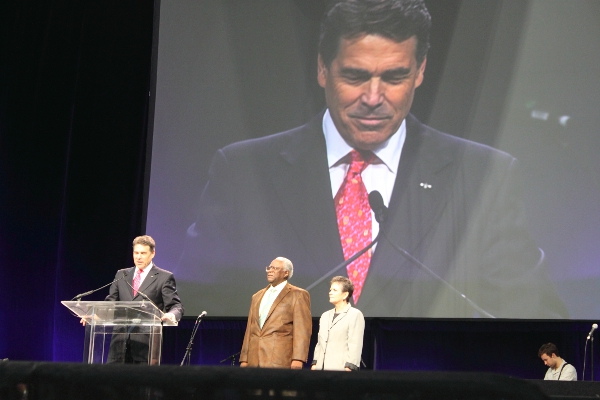 Gov. Perry made his first appearance about two and a half hours into what to that point had been a program of Christian rock and prayer. Gov. Perry took the stage without introduction, yet he was greeted by a standing ovation. Most remained standing as he delivered about 10 minutes of remarks. (Read Perry’s entire speech here.) He renewed his call for the nation to pray during difficult times and asserted that God does not have any connections to any particular party.

Gov. Perry made at least two other appearances. He was on stage to pray with a small group, and he returned at the end of the program to deliver brief closing remarks.

From the moment he left the stage, some have taken a told-you-so attitude about Gov. Perry’s speech, which was largely free of politics. And while that’s true — there was no overt request to “vote for me” and no stump speech on policy by Gov. Perry — others who took the stage later made political points for him on topics like abortion rights, and as one speaker put it, “the truth” about the sin of homosexuality.

And we’ll remind you that this was never going to look like a party convention full of fiery political speeches. This was first and foremost designed to make a show of Gov. Perry’s faith in cooperation with various right-wing groups, like AFA. Mission accomplished? Voters will decide.

We’ll also remind you of who Gov. Perry is. On the stage was the elected leader of a very large state taking a central role in a Christian’s-only event, the same person who is openly considering a run for president. The political calculation was obvious just by looking at the special interest groups and nakedly partisan operatives who organized and endorsed the event. Today, in fact, attention has already begun to focus on a probable Perry run for president, with most reports pointing to an announcement in the next 7-10 days.

The Others
Throughout the program the American Family Association was rarely seen. Much of the attention surrounding The Response had been focused on that hate group, known for inflammatory and vicious rhetoric. And while the Mississippi-based group put up more than $600,000 of its own money for The Response, it was almost nowhere to be seen. Save for a brief introduction of AFA founder Don Wildmon, there was little other mention of the AFA. Bryan Fischer, the AFA personality who is making a career out of hate speech, kept a low profile throughout.

Not missing from the stage, however, were individuals who have said some pretty remarkable things.

Mike Bickle of the International House of Prayer spent a considerable time on stage leading the crowd in prayer. Bickle, too, stayed clear of politics and even went as far as asking for prayer for President Obama. Bickle was joined in asking blessings for the president by San Antonio mega-church pastor John Hagee. It was difficult to take Bickle and Hagee seriously. Their rhetoric in the past — including Hagee’s anti-Catholic and anti-Semitic statements — has been vicious and divisive.

Hagee also had the most ironic comment of the day. During a prayer, he connected Gov. Perry to President Lincoln, saying both had the courage to call the nation to prayer. It’s hard not to chuckle at a comparison of the man who lead the country through the Civil War to Gov. Perry, who has flirted with secessionists who want Texas to leave the Union.

And then there was Vonette Bright. The widow of Campus Crusade for Christ founder Bill Bright called for prayer and posting the Ten Commandments in school classrooms. The Constitution and the Supreme Court would have a problem with that, Mrs. Bright.

One person who would likely agree with Bright was David Barton, the faux historian who has made a career of mixing faith and politics. He skipped the history lessons this time, appearing on stage only to offer a brief prayer.

Uniting vs. Dividing?
Gov. Perry and the AFA have long claimed that The Response was meant to bring the nation together. It might have missed the mark. A simple example is Hagee taking to the mic to declare:

We confess that we are still a Judeo-Christian nation.

Hagee’s comment is not unlike Barton’s continuing claims that the country was created by and for Christians, effectively leaving other faiths on the outside looking in.

Don Finto drew another divisive line by calling on Jews to convert to Christianity by praying for Jews to “come to their own Messiah.”

Attendance
As with any potentially divisive event, there’s a dispute about whether the attendance count means success or failure. Fair estimates have attendance at 20,000 on the low end and 30,000 on the other end. If you consider that only 8,000 had RSVP’d as of last week, that 20,000 to 30,000 seems like a success. If you instead consider that the cavernous Reliant Stadium holds 71,000+, the attendance even on the high end isn’t very impressive. Plus, there was also the steady exodus after noon. By the time it was over, at least half the crowd was gone.

Early in the day: 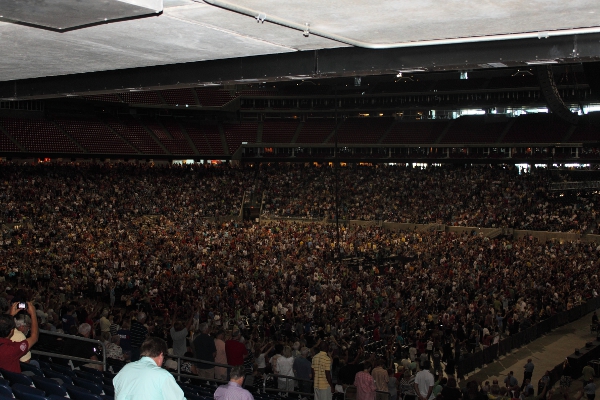 Later in the day: 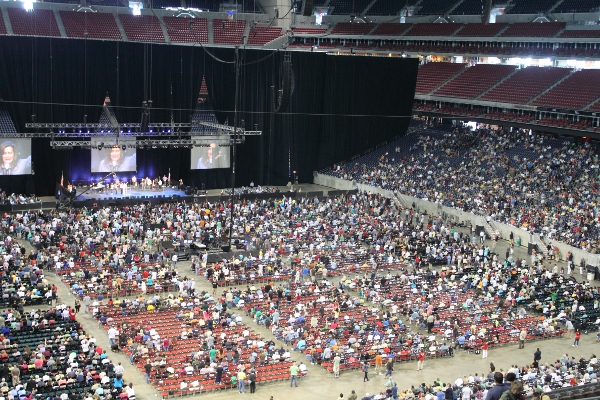 We’ll say this about those who attended: the vast majority were there to express their faith. They did so peaceably and respectfully. But you have to wonder how many were aware they could potentially be used as a prop in a campaign ad. You also wonder how many of them knew what the AFA stands for, and if they knew, how many would really want to be in the same room with those who peddle hate every day.

13 thoughts on “Our Day at The Response”