Because of a lot of hard work by the Texas Freedom Network, our partners in the Coalition for Public Schools, and pro-public education lawmakers, the Texas Legislature has never passed a private school voucher scheme that would drain hundreds of millions of dollars from already cash-strapped neighborhood public schools. But taxpayers in neighboring Louisiana will soon be shelling out big money in a vast voucher scheme to privatize education there.

Parents who hope to use the new vouchers to send their children to the state’s best private schools this fall shouldn’t hold their breath. Most of those schools have very few openings for Louisiana’s new voucher students. (This shouldn’t be a surprise. The best private schools cherry-pick their students. They can turn away students they don’t want and/or have no room for. Public schools take all the students who show up at their doors.)

According to a Reuters article, the most openings are at smaller and less prestigious religious schools — many with some rather questionable approaches to education:

The school willing to accept the most voucher students — 314 — is New Living Word in Ruston, which has a top-ranked basketball team but no library. Students spend most of the day watching TVs in bare-bones classrooms. Each lesson consists of an instructional DVD that intersperses Biblical verses with subjects such chemistry or composition.

The Upperroom Bible Church Academy in New Orleans, a bunker-like building with no windows or playground, also has plenty of slots open. It seeks to bring in 214 voucher students, worth up to $1.8 million in state funding.

At Eternity Christian Academy in Westlake, pastor-turned-principal Marie Carrier hopes to secure extra space to enroll 135 voucher students, though she now has room for just a few dozen. Her first- through eighth-grade students sit in cubicles for much of the day and move at their own pace through Christian workbooks, such as a beginning science text that explains “what God made” on each of the six days of creation. They are not exposed to the theory of evolution.

“We try to stay away from all those things that might confuse our children,” Carrier said.

Tax dollars will now subsidize those Louisiana nonpublic schools. Students who can’t get into even those voucher schools will be left behind in struggling public schools that Gov. Bobby Jindal and other Louisiana officials seem to have decided to starve or abandon rather than work to fix. State officials claim that the voucher scheme will save money, but they have conducted no fiscal analysis to back up that claim. They haven’t even developed a plan for holding voucher schools accountable for the academic progress of the students they will now claim to educate at taxpayer expense. Frankly, it’s hard not to weep over an entire generation of Louisiana schoolchildren being sold down the bayou.

So will Texans see a scheme like this offered in the 2013 legislative session? Voucher advocates like WallBuilders founder and history revisionist David Barton seem to hope so. Barton is touting the Louisiana scheme on his Twitter account: 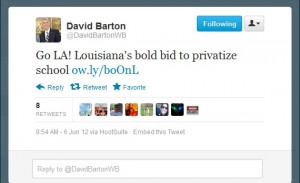 In slashing billions of dollars in funding from public schools last year, Gov. Perry and the Texas Legislature made it clear that public education isn’t a priority for them. That’s why TFN and other public education advocates will be on high alert as the 2013 legislative session gets closer. Our message will be clear: don’t drain money from neighborhood public schools to subsidize tuition at private and religious schools that aren’t accountable to taxpayers and that don’t have to meet the same standards as public schools. You either support public education or you support private school vouchers. Period.