Testimony and our live-blogging will resume after the board returns from a lunch break at 2 p.m. A live, streaming Web cast of the hearing is available here. Click on the January 13 link. SBOE Chair Gail Lowe says the board will end the hearing at 6 p.m., even if there are people still waiting to testify. Mary Helen Berlanga says she and any other board members who join her will stay until everyone has a chance to speak.

TFN Insider will continue blogging from the hearing at 2 p.m. In the meantime, please consider supporting the Texas Freedom Network and our work for sound curriculum standards for Texas public school students. We can continue our work only with your generous support. Please click here to donate.

2:10 – The hearing has resumed, with state Rep. Norma Chavez asking that students be required to learn about important Latino historical leaders, such as Cesar Chavez Irma Rangel and former congressman Henry B. Gonzalez.

2:25 – A testifier suggests that students are taught that socialism is better than capitalism, and she says that the standards promote discussions of social injustice and multiculturalism over discussions America’s accomplishments. Board member Mavis Knight asks for examples, but the testifier says she has none to give.

2:29 – Board member Mary Helen Berlanga pounces on the statement that “we shouldn’t focus on past injustices.” She asks whether that means social studies should simply ignore segregation and racial discrimination. The testifier: “I’m just saying, don’t emphasize them (past injustices).”

2:34 – Board member Rene Nunez: Would you say world history courses should ignore the Holocaust? Testifer: Well, that’s too specific of an example. “We should just stick to the facts.”

2:53 – Signs from the Tea Party “rally” (such as it was) at the Texas Education Agency today: 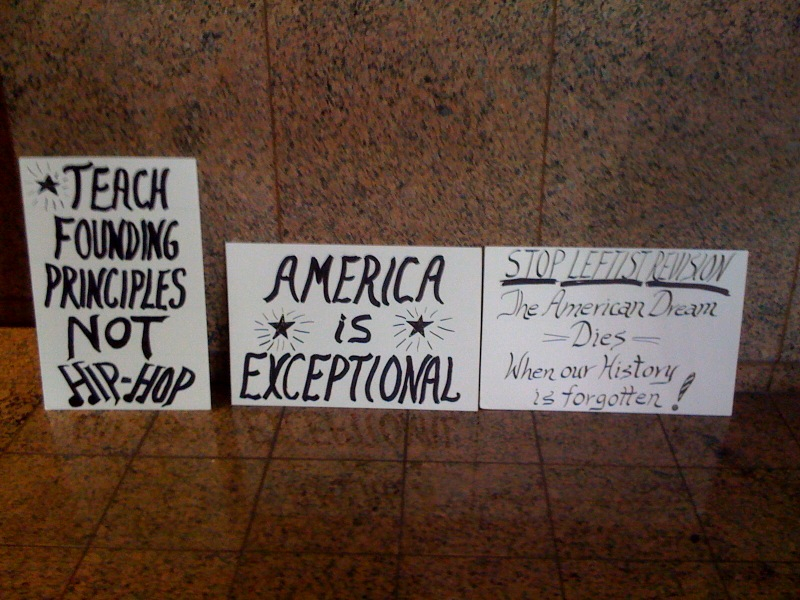 2:57 – A new testifier wants the standards to emphasize the 10th Amendment as limiting the power of Congress and protecting the rights of the states. He argues that U.S. government today threatens freedom. He pushes the concept of state nullification of federal laws that the state sees as unconstitutional.

3:15 – Groups like the American GI Forum are out in force today, calling on the board not to downplay the contributions of Latinos in Texas and American history.

3:17 – A testifier claims that America has never conquered another land except to free a people. Really? We hear wry chuckles from the many Mexican-American members of the audience.

3:25 – Another testifier, George Scaggs, calls on the board to promote “American exceptionalism” in the standards. He suggests that it has been suggested that the word “exceptionalism” be replaced by “imperialism.” That’s entirely untrue. Does the right ever get tired of making such absurd “straw men” arguments? Of course not.

3:28 – Scaggs: People don’t flock to the shores of Somalia, Egypt and France; they come to America.

3:33 – Another testifier is critical of the proposed standards, charging that they are more appropriate for a college course in “political correctness” than a public school classroom. She goes on to say that discussions of racial oppression don’t compare to the the reality of oppression under “godless communism.”

3:36 – Dotty Griffith of the ACLU of Texas is up. She warns against using public school classrooms to preach and promote “one faith over others.”

3:40 – Another testifier: We’re teaching our children to admire socialists like Dolores Huerta. She wants to get rid of “political correctness” in the standards. Board member Mary Helen Berlanga pounces. You object to Huerta in the standards, Berlanga says, then you say public schools should be teaching about how people overcame discrimination and other suffering. Yet people like Huerta and Cesar Chavez worked to help Latinos win their rights and freedoms. She then delivers a passionate recounting of the discrimination Latinos have faced in Texas and American history. The testifier (Janie Brittain) replies: “The point is, she (Huerta) is currently a member of the socialist party. . . . Socialism isn’t about freedom. She hasn’t learned the lesson that socialism brings tyranny and not freedom.” Clearly, Berlanga’s point passed right by her.

3:50 – Nancy Hester, president of the Texas Council for the Social Studies, is up. Far-right board members in recent months have absurdly attacked the TCSS as a left-wing group. Hester speaks in support of the standards drafted by the curriculum writing teams.

3:53 – Board member McLeroy: What could be done to make history more exciting for students? Hester suggests: make history relevant to students. Of course, wouldn’t ensuring that Latino students also learn about the contributions of Latinos in history help with this? But the Tea Partiers apparently wouldn’t agree.

3:56 – It’s interesting that far-right board members didn’t choose Hester’s testimony as an opportunity to criticize TCSS again. Do they prefer just to attack when their victim can’t respond?

4:31 – Jon Roland of the Constitution Society is up. The group’s Web site argues that the federal and state governments aren’t obeying their respective constitutions. Roland appears to support the use of militias as a solution to problems like the drug trade and terrorism.

4:33 – Board member Mary Helen Berlanga has spent considerable time today trying to explain the perspective of Latinos and other minorities who have often been under-represented in teaching about social studies. We wonder whether her statements are falling on deaf ears.

4:50 – Most television reporters left hours ago, but the press table is still full of print reporters.

5:04 – State Rep. Wayne Christian sent a statement to be read to the board. The right-wing Texas lawmaker writes that he is concerned that students aren’t getting an adequate social studies education. He suggests that public schools are ignoring instruction on important parts of American history to avoid offending people elsewhere, but he offers no examples of anything like that actually happening. Are you surprised?

5:12 – Brian Thevenot at the Texas Tribune looks at the debate over diversity during the SBOE social studies hearing today. Check it out.

5:16 – Rosa Rosales, national president of the League of United Latin American Citizens, is finishing her testimony. Ms. Rosales called on the state board to ensure that the contributions of Latinos in Texas and American history are included in the curriculum standards.

5:31 – Karen Gross of the Anti-Defamation League-Southwest Region is up. The ADL message is clear: protect the religious freedom of all children in public schools by not promoting religious views and one faith over all others in social studies classrooms.

5:53 – SBOE District 5 candidate Rebecca Bell-Metereau is testifying now. She notes her concerns about under-representations of women and minorities in the standards and efforts to promote religion in social studies classrooms.

5:57 – Board member Barbara Cargill asks where the standards drafts promote religion. Bell-Metereau notes that the drafts don’t do that — right now. In fact, the point of many testifiers today is that they don’t want the board to politicize the standards as they did in language arts and science.

6:10 – The board is closing today’s testimony. SBOE Chair Gail Lowe notes that Gov. Rick Perry today made an announcement on federal Race to the Top funding. In fact, Gov. Perry said Texas will not seek the $700 million that would be available through that funding stream.

6:13 – The board is getting angry comments from people who waited all day to testify. They’re demanding that the board continue hearing testimony. (We sympathize. After all, the board isn’t often asked to listen to their constituents on these issues.) A motion to extend the hearing fails on a tie vote. In the chaos, it’s hard to tell how all of the board members voted. But most of the “no” votes appear to have come from the board’s far-right faction. Surprised?

6:18 – Now would-be testifiers are shouting in anger. More chaos. The chair, Gail Lowe, has to break a tie on a motion to adjourn the meeting. Could there be a clearer representation of the indifference some board members have for the concerns of their constituents?

TFN Insider will resume live-blogging during tomorrow’s board debate on the standards.

UPDATE: After adjournment, the state board’s five Democrats remained to continue listening to testimony from those who were unable to speak before the hearing ended. Many of the remaining testifiers were Latinos, some of whom had traveled from across the state to the hearing.