Even as Republicans who voted for the anti-gay discrimination bill in Arizona now admit they made a serious mistake, some religious-right activists are doubling down in their hate campaign. In fact, some just seem downright obsessed about gay people. Case in point: Jonathan Saenz at Texas Values, the lobby arm of Plano-based Liberty Institute.

At times Saenz’s Twitter feed appears to be almost a constant stream of posts about LGBT people, from his defense of discredited “research” about gay parenting to support of government-sanctioned discrimination. On Tuesday, for example, Saenz let loose with a long stream of posts about his frustration with critics of the Arizona bill. The bill would allow any person or entity — including businesses and nonprofit organizations — to offer their religious beliefs as an excuse to discriminate against LGBT people.

Some of Saenz’s tweets sound almost unhinged from reality. And many seem designed to frighten people into believing things that are simply not true. He inaccurately claims, for example, that churches could be forced to perform same-sex marriages if Arizona’s governor vetoes the bill: 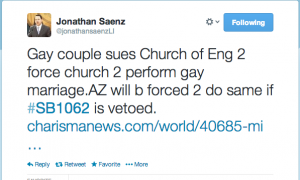 He even suggests that they’re bullies because they oppose discrimination: 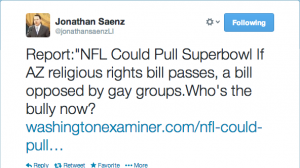 One of the silliest tweets from this self-described “constitutional scholar” came Monday, when he addressed marriage equality:

We’re sure he thought that was clever.

Saenz’s obsession with gay people and promoting discrimination will likely reach new heights once federal District Judge Orlando Garcia in San Antonio releases his ruling on whether the Texas ban on same-sex marriage violates the U.S. Constitution. However Judge Garcia rules, one thing seems clear: people like Saenz and the hateful rhetoric they use look increasingly like relics from the past. They’ll be with us for a long time to come, no doubt. But more and more people see them for what they are: voices of hate and division, not defenders of religious freedom.