Faith Leaders Speak Out for LGBT Equality in Texas 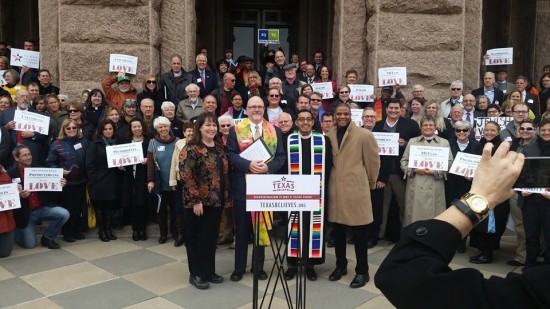 Hundreds of clergy and other faith leaders from Protestant, Catholic, Unitarian and Jewish congregations gathered today at the Texas Capitol to speak out for LGBT equality. The Texas Freedom Network co-sponsored the event with Equality Texas. Here’s the press release we sent out:

Discrimination Should Be Unacceptable to People of Faith, Speakers Tell Crowd at Texas Capitol

With political battles over marriage and nondiscrimination measures heating up, hundreds of clergy and other people of faith gathered at the Texas Capitol today to call on lawmakers to end discrimination based on sexual orientation and gender identity or expression.

Speaking at an event on the Capitol steps, the Rev. Eric Folkerth of Northaven United Methodist Church in Dallas noted the lesbian, gay, bisexual and transgender members of his own congregation.

“The idea that any of them might be discriminated against under state or local laws is absolutely unacceptable,” Folkerth said. “Not only is this unacceptable to me as a minister of the Gospel, but it’s unacceptable to straight members of my congregation, who cannot fathom why any community in Texas would discriminate against LGBT people.”

United Church of Christ minister Leslie Jackson of Houston called on Texans to embrace marriage equality for LGBT people and oppose discrimination in employment and housing.

“No one should be turned away from a job or denied a place to live just because of who they are,” Jackson said at the Capitol event. “Surely all of our diverse faith traditions and differing beliefs can come together around this simple value: having a roof over your head and keeping a job should not be based on what you look like or who you love.”

The Rev. Michael Diaz of Resurrection MCC of Houston echoed his colleagues.

“Like the majority of people across this great state, we believe our religious faith should lead us to anti-discriminatory love, not unjust discriminatory laws and practices,” Diaz said. “No one’s religious beliefs should trump the civil rights of another.”

Following the event on the Capitol steps, advocates representing scores of congregations from around the state dispersed throughout the Capitol, visiting legislative offices to spread the message of support for LGBT equality.

Lawmakers this session are considering measures that would, among other things, bar state contractors from discriminating on the basis of sexual orientation or gender identity and open the door to marriage equality for same-sex couples.

On the other hand, legislators are also considering measures that would gut local nondiscrimination ordinances. For example, proposed constitutional amendments – SJR 10 and HJR 55 – would allow individuals and businesses to ignore almost any laws, including nondiscrimination protections for LGBT people, for religious reasons.

In addition, HB 623 by state Rep. Cecil Bell, R-Magnolia, would strip salary and benefits from any public employee who complies with a future court decision overturning the state’s ban on same-sex marriage.

Speakers at the Capitol event urged people of faith to visit TexasBelieves.org to sign up in support of LGBT equality and against discriminatory laws.

Equality Texas and Texas Freedom Network are co-sponsors of Faith Advocacy Day. Advocates were joined by a large group of representatives from the Texas Unitarian Universalist Justice Ministry as well as leaders from Texas Catholics for Inclusion.