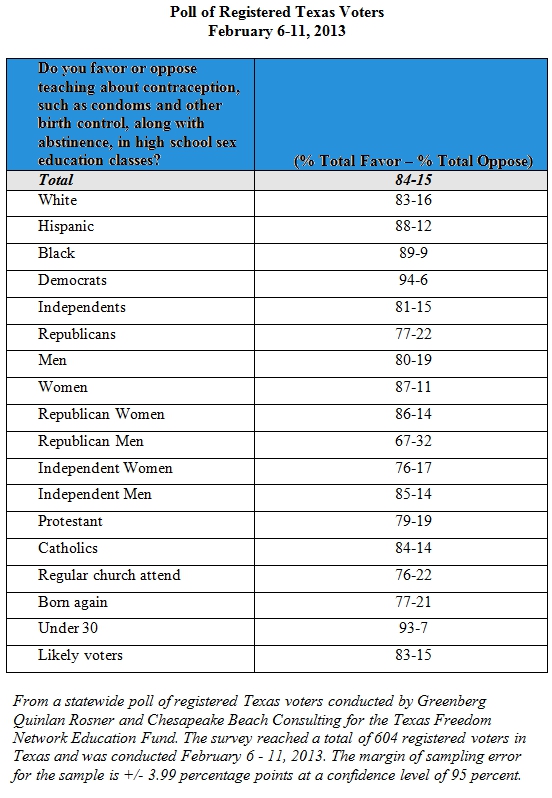 As Texas lawmakers consider legislation — Senate Bill 521 — that would make it harder for public schools to teach responsible sex education, we thought it was worth pointing out what Texans think. After all, this is an important issue in a state with the fourth-highest teen birth rate in the nation.

The Texas Freedom Network Education Fund’s February statewide poll of registered voters makes the public’s verdict pretty clear. By a margin of 84-15 percent, registered voters support teaching high school students about birth control as well as the importance of abstinence in sex education classes. (Click on the table for a larger version.)

Support for responsible sex education is overwhelming in every major demographic category: among white and minority voters; among men and women; among Democrats, Republicans and independents; and among Protestants, Catholics, regular church-goers and “born again” Christians.

Religious-right pressure groups and abstinence-only activists make the issue controversial at the Capitol.  They are determined to make it even more so by dragging sex education and public schools into the abortion wars. The Senate Education Committee’s public hearing on SB 521 made that clear.

But for most Texans, responsible sex education is simply common sense.

It took years to convince the @TXSBOE to create a Mexican American studies course for the state's public schools. It's great to see school districts offering it to students. cbsloc.al/3kKHvgR

You might have heard about an election happening in a few weeks. Today, on #NationalVoterRegistrationDay , TFN's @texrising program would like to help you register to vote. Click here to get started: bit.ly/txrnvrd pic.twitter.com/pnDm…

The Texas State Board of Education is Failing LGBTQ+ Students austinchronicle.com/… via @AustinChronicle

To all who celebrate, we wish a very happy and sweet new year this Rosh Hashanah! We are incredibly grateful for the passionate Jewish leaders in our community working towards reproductive freedom, LGBTQ inclusion, and the empowerment of women. pic.twitter.com/jCcZ…

Our latest polling with @JoltInitiative, @MOVE_texas, and @texrising shows ambitious climate policies including 100% clean energy by 2035 are popular in the Lone Star State, especially among young voters. dataforprogress.org/…

Proponents called the rejection "especially tragic" as research shows that most #LGBTQ #students don't feel safe at school because of gender harassment and bullying. Special thanks @RubenforTexas @TFN abcn.ws/3kltqGt via @ABC