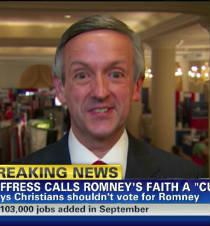 Robert Jeffress, the far-right pastor of a Dallas megachurch and a prominent religious-right supporter of Donald Trump’s presidential campaign, is arguing that the Constitution doesn’t protect a right to privacy for Americans. In one of his “Daily Devotion” emails sent to followers last week, Jeffress attacks Supreme Court justices for supposedly “inventing” that right:

As our friends at the ACLU point out:

The right to privacy is not mentioned in the Constitution, but the Supreme Court has said that several of the amendments create this right. One of the amendments is the Fourth Amendment, which stops the police and other government agents from searching us or our property without ‘probable cause’ to believe that we have committed a crime. Other amendments protect our freedom to make certain decisions about our bodies and our private lives without interference from the government — which includes the public schools.”

The right to privacy means, for example, that government can’t bar married couples from obtaining and using contraception (Griswold v. Connecticut) and that sodomy laws are unconstitutional (Lawrence v. Texas). The Supreme Court has also ruled that the right to privacy means women can make their own decisions about whether to have an abortion (Roe v. Wade).

Of course, religious-righters like Jeffress hate all of this, just as they do the key constitutional principle of separation of church and state. That’s because they want to use government to impose their personal beliefs on those who don’t share them.

The fundamental promise of religious liberty in the Constitution means that we all have the freedom to believe, worship and live out our lives according to our personal religious convictions. The right to privacy and separation of church and state reinforce that freedom while also helping ensure that people like Jeffress can’t impose their personal religious beliefs on others.