Watching religious-righters twist themselves into knots in an effort to explain their support for Donald Trump has been a fascinating experience. Consider, for example, the experience of state Rep. Jeff Leach, R-Plano.

Leach is a strident religious-righter. He has supported, for example, legislation promoting discrimination against LGBT people, opposing same-sex marriage, and “defunding” Planned Parenthood. In fact, in 2013 and 2015 he filed legislation barring Planned Parenthood from having anything to do with sex education in public schools because the organization is an abortion provider. Last year he argued that Sharia (Islamic) law was somehow a “menace” in Texas. In short, he pretty much checks all the RR boxes.

Now Leach (like so many other Texas Republican elected officials) is supporting Trump for president. But that support seems to have become a little harder for him to stomach this past weekend, at least temporarily. On Friday, as we all know, a recording of Trump bragging about sexually assaulting women became big news. 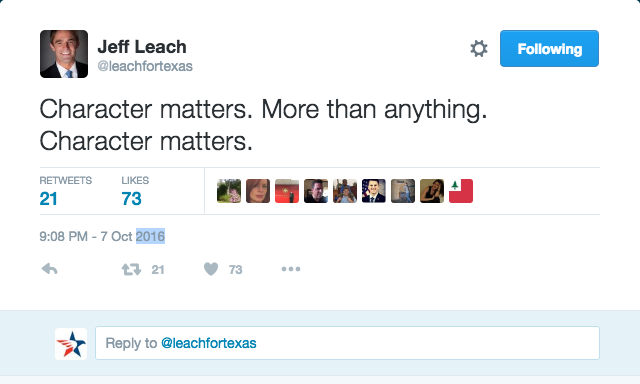 That makes pretty clear what Leach’s priority is, yes? Leach tweeted this the next day: 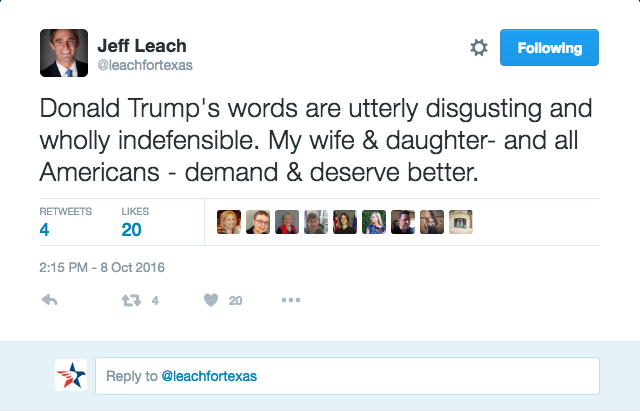 But if Leach was rethinking his support for Trump, that process apparently didn’t last long. In a Facebook post on Tuesday, Leach urged the defeat of Hillary Clinton without even mentioning Trump. From the post:

[A]s we saw in the debate Sunday night, Hillary Clinton cannot and must not be elected President. Hillary has spent decades in Washington. She has had enough time to right the American ship, and as is clearly evident, all she has done is steer our great Nation further off course. A President Hillary Clinton would equate to 8 more years of Barack Obama, and America cannot afford it, and possibly cannot survive it. Vote for liberty. Vote Republican!

So does that mean character now doesn’t matter “more than anything” for Leach? He doesn’t say.

This afternoon Leach tweeted a long statement from Dr. Jack Graham, Leach’s pastor at Prestonwood Baptist Church in Plano. Graham noted in his statement that he has been serving on Trump’s “Religious Advisory Council,” whose “responsibility is to offer prayer, spiritual support, and pastoral counsel” to the candidate. He goes on to explain his own support for Trump’s election:

“For me, it has always been about the issues—not Donald Trump’s past, but America’s future. Every person should vote his or her convictions and vote for what is best for our country. In my view, the choice for Evangelical Bible-believing Christians could not be clearer. With Donald Trump and Mike Pence, Christians have an opportunity to influence our government and practice our religious freedoms. I will continue to pray that we will reverse from our current spiritual decline as a nation by seeking God and repenting of our own sins and finding the hope and healing we need that only comes from the Lord Jesus Christ.”

Leach’s tweet today calls Graham’s statement “a great & timely word on the election and @realDonaldTrump.” And that, friends, is how Jeff Leach seems to have come to peace with his apparent realization that character doesn’t, in fact, matter “more than anything.”