What is it with the American right’s love affair with Vladimir Putin’s Russia these days?

Tom Pauken, who served as chair of the Texas Republican Party in the 1990s and currently supports Donald Trump for president, tweeted this morning that Russia is “returning to its Christian roots” while the United States is “going in the opposite direction.” 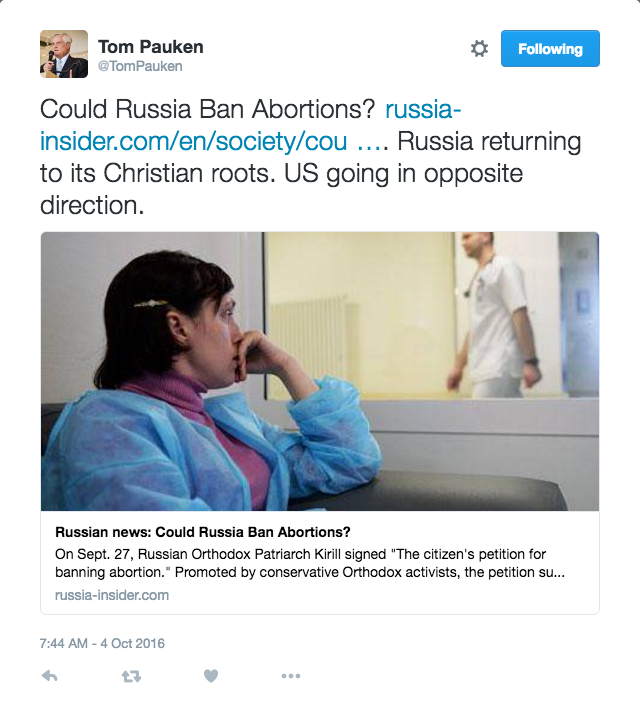 Pauken’s tweet links to an article on the website Russia Insider about an effort to ban abortion in that country.

Russia Insider is a website launched in 2014 to counter what it says is “biased and inaccurate” coverage of Russia in Western media. Clicking around on the site reveals articles praising Russian President Vladimir Putin (Presidents Obama and Putin – The Difference in Core Values, Putin: Savior of the Decadent West), trying to discredit an investigation that found pro-Russia rebels shot down a passenger airliner over Ukraine, and justifying Russian support for Syrian dictator Bashar al-Assad’s government. Then there is today’s post on the site’s home page promoting a screed from alt-right conspiracy theorist (and Texan) Alex Jones.

Those make up just a small sampling of the numerous propaganda stories you’ll find on Russia Insider. But you’ll also find lots of articles generally supportive of the persecution of LGBT people in Russia, such as: Russian Church Cuts Ties with French and Scotch over LGBT ‘Plague,’ Russia-West Divide Boils Down to the Gay Issue, and Russians Zap Sodomite Postage Stamps.

Some conservatives and libertarians in this country are concerned by the seemingly growing adoration of Putin on the American right — particularly the alt-right. See here and here, for example.

But it appears that Pauken is among those seeing Putin’s Russia as morally superior to the United States.