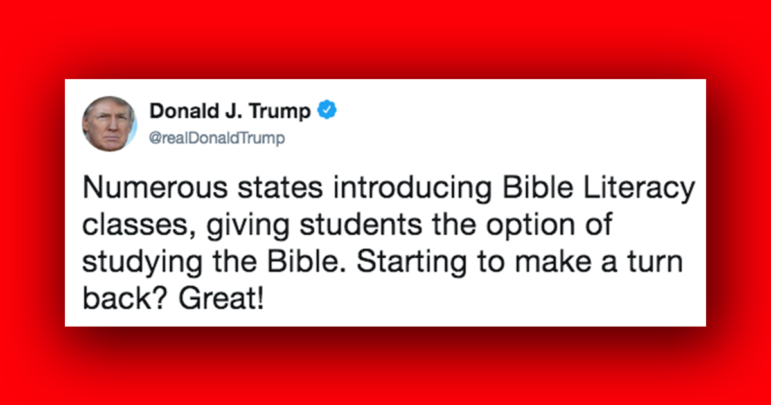 Bible courses in public schools appeared to get a high-visibility boost Monday when President Trump tweeted about a group of states proposing such classes. “Starting to make a turn back? Great!” he tweeted. As a Bible scholar, I’d join with the president in affirming the value of a good grasp of the Good Book.

But I can’t heartily endorse Trump’s tweet because its words reflect a deep misunderstanding about the way the Bible, in the present and the past, has been handled in public school.

In fact, the measures to which he seems to be referring, state-level bills promoting study of the Bible in public schools, aren’t new and aren’t necessary. It’s already legal to teach about the Bible in U.S. public schools, but the topic has been swallowed in recent decades by politics and culture war that blur that fact. What American public (or private) schoolchildren in 2019 desperately need is broad religious literacy. The backstory of the measures Trump cites, unfortunately, instead makes clear that our youth are sometimes being subjected more to culture war than cultural literacy.

Read the rest of Mark’s column in the Washington Post