American Revolution NOT a rebellion, a violation of Rom. 13. Once declared independence, were resisting foreign aggression. 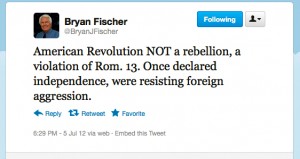 So, Bryan, was President Lincoln guilty of “foreign aggression” when he saved the Union after the Confederate states declared independence?

UPDATE: And what was Fischer up to? Our friends at Right Wing Watch have it: rewriting American history so that it conforms to his interpretation of the Bible.