We just received word that Texas Freedom Network founder and Planned Parenthood President Cecile Richards is on a plane bound for Austin to join the fight against the far right’s war on women at the Texas Capitol. We are told Cecile will speak Tuesday morning at a rally against Senate Bill 5 and other efforts by far-right politicians to interfere with women’s private medical decisions.

And if you’re not angry enough about the religious right’s outrageous attacks on women’s health care at the Capitol, check out these sneering tweets this afternoon from Texas Eagle Forum President Cathie Adams: 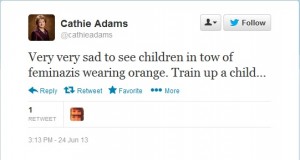 One thought on “Breaking News: TFN Founder Cecile Richards Heads to Austin to Rally Texans Against the War on Women at the Texas Capitol”