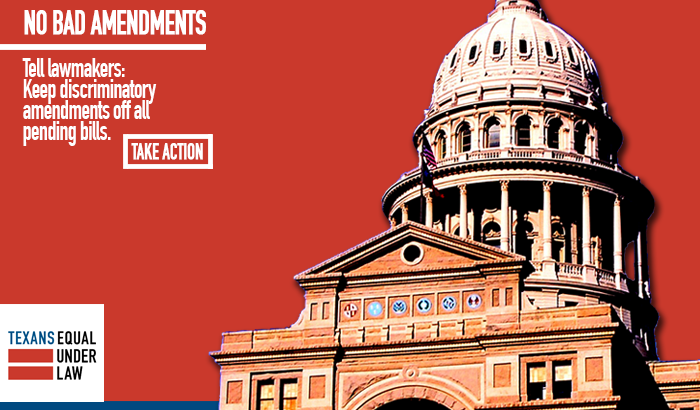 We’re down to just 12 days left in the 2015 legislative session in Texas, and attacks on LGBT equality are becoming increasingly desperate. Rumors are swirling about potential amendments to SB 2065, which is scheduled for debate by the Texas House on Thursday.

Religious-right groups are clamoring for passage of SB 2065, which they say will prevent clergy from being forced to perform marriages that violate their religious beliefs. But the Constitution and state law already protect that right for clergy, and no one has proposed changing that.

So what is the religious right up to now? This could be the last gasp for mean-spirited legislation like state Rep. Cecil Bell’s “Defy the Supreme Court” effort to block marriage equality in Texas, or state Rep. Scott Sanford’s proposal to allow discrimination against LGBT families in the adoption and foster care system. Either of those previously dead bills could rise tomorrow as an amendment to SB 2065.

It’s time to take to email and the phones again to tell your state representative: Vote NO on any discriminatory amendments to SB 2065.

So far this legislative session, supporters of equality have blocked efforts to enshrine anti-LGBT discrimination in state law. Don’t let up now. Click here to tell your representative: Discrimination has no place in Texas.