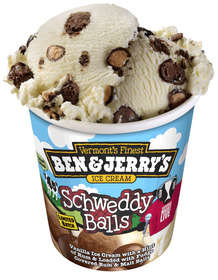 The folks who sponsored Gov. Rick Perry’s summer prayer fest are all pistachioed at the name of a new flavor of Ben & Jerry’s Ice Cream and have manufactured a controversy that they’ll probably milkshake for all it’s worth.

One Million Moms, a project of the American Family Association, is warning Ben & Jerry’s that the company faces a rocky road if it continues to peddle its new flavor, “Schweddy Balls,” which is named after the famous Saturday Night Live skit.

NPR has the scoop on the new flavor.

Well, the dra-cone-ian folks at the AFA have given “Schweddy Balls” an ice cold reception. One Million Moms is calling on supporters to contact Ben and/or Jerry to voice their displeasure. In the alternative, One Million Moms supporters were asked to praline for the company at Sundae church services.

Safe to say that on top(pings) of being a hate group, the AFA apparently also lacks a sense of Good Humor.

If Ben & Jerry’s persists, One Million Moms says its supporters will stop buying the company’s products.

Yet another AFA boycott? Meh. How vanilla.