Texas Rising, the Texas Freedom Network’s project to engage young people in the political process, relies on some incredible individuals doing great work on their college campuses and in their communities all across the state. We’d like to introduce you to some of these amazing young activists advocating for a better, more fair Texas.

What issues are you passionate about? 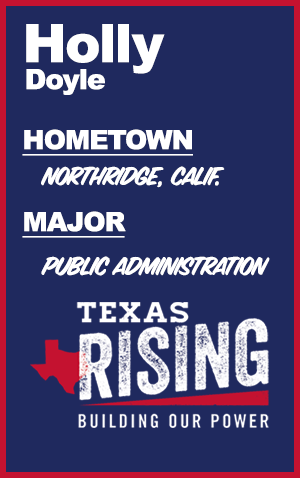 My main focus during my time with TFN has been abortion access advocacy. Abortion access has been under constant attack since long before I moved to Texas, so this work is always timely and necessary. I am very interested in making the conversation around abortion as inclusive as possible. Cisgender women are not the only people who can get pregnant and might need access to abortion services. Expanding the conversation around abortion to include transgender individuals is something I have worked towards ever since I was hired on as a campus organizer by TFN. Right now the Supreme Court of the United States is reviewing Whole Woman’s Health v. Hellerstedt, a case examining the constitutionality of HB2, Texas’ omnibus anti-abortion bill passed during a second special session of the Texas legislature in 2013. It is my sincerest hope that the court will recognize that HB2 places an undue burden on Texans seeking abortion care and declare HB2 unconstitutional.

Why does a project like Texas Rising matter to you?
Texas Rising is so important because it harnesses the political power of millennials by mobilizing us to action. In my experience, it is rare for me to come across someone my age who is genuinely apathetic, who really just doesn’t care about political issues at all. Instead, I find that millennials aren’t engaged in politics because so many of us have been disenfranchised and taught that our voices don’t matter for so long. There are several groups that don’t want us to vote because millennials tend to be left-leaning, so there is much to gain by preventing us from realizing our true power. Millennials need to know how exactly they can plug into a political movement and then be given the opportunity to get their toes wet. Not everyone can devote their lives to political advocacy, but many can participate in small calls to action. Texas Rising matters to me because it provides an outlet for millennials to become engaged on our own terms and helps us realize our true power.

What would an ideal Texas look like to you?
My ideal Texas would look much more moderate and mature. Politicians at every level are going to disagree on what is best for the people they serve, and that’s fine. Differing views and opinions are an inescapable part of life. But Texas could do without the political extremism that characterizes so much of what happens at the Capitol. I have heard about, and personally experienced, Texas politicians refuse to meet with their constituents because their constituents disagreed with them. Political extremism prevents individuals on both sides of the political isle from finding common ground on divisive issues. I believe establishing common ground is essential to progress, and Texans deserve better than childish politicians who refuse to play well with others.