The American Family Association isn’t the only one playing fast and loose with election law in their almost-but-not-really-endorsement of Gov. Rick Perry. The American Renewal Project — part of a shadowy network of state-based organizations, including the Texas Restoration Project, that supported conservative candidates in previous election cycles — does them one better.

Check out the email sent by the founder of the American Renewal Project on Saturday, August 13 — just hours after Perry formally declared his candidacy for President: 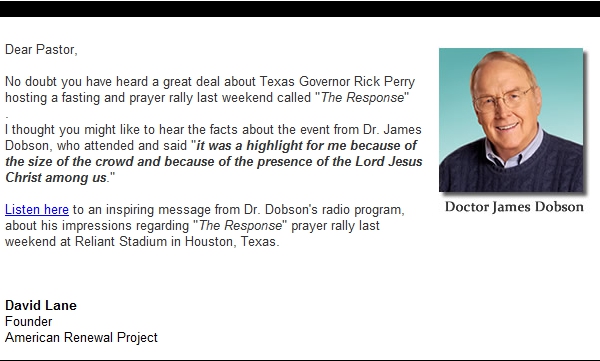 No doubt you have heard a great deal about Texas Governor Rick Perry hosting a fasting and prayer rally last weekend called “The Response”.

I thought you might like to hear the facts about the event from Dr. James Dobson, who attended and said “it was a highlight for me because of the size of the crowd and because of the presence of the Lord Jesus Christ among us.”

Listen here to an inspiring message from Dr. Dobson’s radio program, about his impressions regarding “The Response” prayer rally last weekend at Reliant Stadium in Houston, Texas.

And that’s another supposedly non-political, tax exempt religious organization — James Dobson’s Focus on the Family — lending its name to this well-timed love note as well.

These folks aren’t even trying to avoid the appearance of fairness or non-partisanship, which should come as no surprise, since the creation of the Texas Restoration Project back in 2005 was underwritten by four prominent Perry donors (to the tune of nearly $1.3 million ). Moreover, during the run-up to the 2006 gubernatorial election, the group convened big crowds of conservative pastors at six lavish events. The only candidate who spoke at those events? You guessed it.  Rick Perry.

The old religious right war horses are getting back in the presidential elections game in 2012, and it looks like they have already decided on their candidate: the same one they’ve been supporting for more than a decade in Texas.

9 thoughts on “About That Nonpolitical Prayer Rally, Ctd.”