Over the past two weeks, the world has been marking the 70th anniversary of the atomic bombing of Japan and the end of World War II. This weekend, the Facebook page for Texas Agriculture Commissioner Sid Miller took the anniversary a step further and posted an image suggesting that the United States should duplicate the end of World War II by nuking the Muslim world: 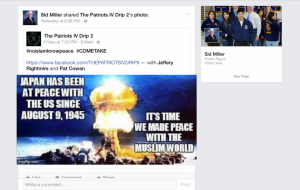 The Houston Chronicle reports that the post went up on Commissioner Miller’s Facebook page late Sunday afternoon but was then pulled down around 11:15 a.m. today. It was shared from the Facebook page for The Patriots IV Drip 2.

The post includes a photograph of a mushroom cloud, the hashtags #noislamknowpeace and #COMETAKE, with the following text:

A spokesperson for Commissioner Miller’s office says a staffer shared the image on the Facebook page and that it does not reflect Miller’s personal views.

But the Chronicle notes that Commissioner Miller has made anti-Muslim remarks in the past:

At a Texas Public Policy Foundation forum in January, Miller said he was kept up at night over “long-range concerns as I hold those two grandbabies on my lap. I have to wonder, when they have grandbabies to hold in their lap, will we be a socialist country? Will we be a Muslim country? Are we doing enough?”

Cue the “outrage” from the far right about “political correctness” — that’s the frequent defense when a right-wing politician (or staffer) does something dumb (and offensive) like this. In fact, before the post was removed from Miller’s Facebook page, commenters were already making light of it. Again from the Chronicle:

“24 empty missile tubes, a mushroom cloud and now it’s Miller time!” wrote a user named Michael Linder. Betty Miller wrote, “Time to drop another one but make sure that Obama,Clinton and Kerry are present.”

The Houston Chronicle article is here.