What is it with right-wingers who seem to have so much trouble with American history? See this tweet today from Peggy Venable, Texas policy director for the Koch-funded, anti-government Americans for Prosperity: 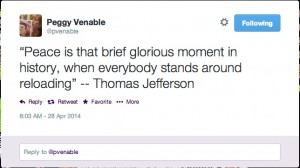 “Peace is that brief glorious moment in history, when everybody stands around reloading” — Thomas Jefferson

Except that there’s no evidence Jefferson ever said that. The Monticello website notes that this quotation has been making the rounds on the Internet since about 2001:

This quotation has not been found in the writings of Thomas Jefferson. The language is somewhat uncharacteristic of Jefferson’s style. “Stand around” in the sense used here is not an expression that can be found in Jefferson’s letters. He almost always wrote “every body” instead of “everybody.” And there are no instances of the word “reload” (or variations thereof) referring to firearms in Jefferson’s writings.

Of course, someone posting a dubious quote from a famous American is hardly news on the Internet. Venable has plenty of company there — on both sides of the political spectrum.

But we’re fascinated by how often leaders and activists on the far right misquote the Founders and get so much else about our nation’s history so incredibly wrong — especially since they often portray themselves as uniquely informed about what makes America exceptional.

David Barton, the phony historian who heads Texas-based WallBuilders, has been among the most infamous misquoters. He has other problems with historical facts as well. Christian publisher Thomas Nelson stopped publication of The Jefferson Lies, Barton’s book about the nations’ third president, because scholars found numerous inaccuracies and distortions throughout it. But none of that stopped the chair of the Texas State Board of Education from declaring Barton to be “a leading historian of our state, if not the nation.”

Barton also served as an “expert” adviser when the state board revised the social studies curriculum standards for Texas public schools back in 2009-10. State board members relied partly on his advice when they vandalized those standards. In fact, the new U.S. history standards are so bad and misleading that even the conservative Thomas B. Fordham Institute calls them “a politicized distortion of history” filled with “misrepresentations at every turn.”

This year the State Board of Education will consider the adoption of new social studies textbooks based on those deeply flawed curriculum standards. The deadline for publishers to submit those textbooks was April 18, and the state will begin its official review of the textbooks soon.

Last year the Texas Freedom Network helped lead a coalition of educators, scholars, businesspeople, parents and other Texans in support of new science textbooks that didn’t include bogus creationist arguments attacking evolution. We won that important battle when the state board adopted textbooks based on sound science, but the fight over social studies textbooks this year will be even harder. Right-wing activists like Barton (and Venable), as well as State Board of Education members, will almost certainly insist that textbook publishers rewrite and distort history to fit their particular political agendas.

But we’re determined not to let them get away with it. We’ll be letting you know soon how you can get involved in our efforts this year to ensure that Texas students get a history education based on facts and sound scholarship, not right-wing political agendas.

17 thoughts on “Why Does the Right Have Such a Problem with History?”